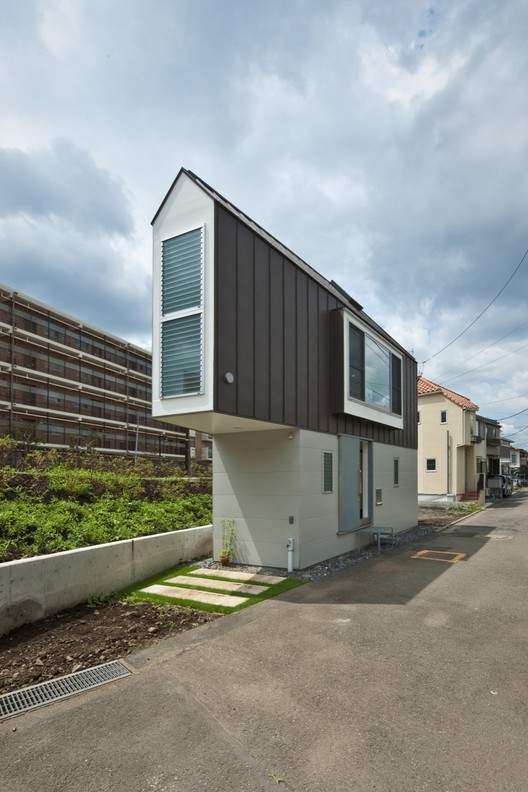 Text description provided by the architects. This is a very small house built on the triangle site where the river and the road were crossed and made to the acute angle. For the dead-end road, it became a plan in various regulations for obtaining special permission.

Residents are husband and wife and a little girl. Although it was a novel site of a limited area, since a river was faced through a bank and a promenade, I would like to design various relations with the river. The building is the form that cut an acute angle part on a triangle plan derived from the site. Furthermore, it got the maximum volume of hip roof of three planes in restriction of setback-line.

Although the level0 floor was a private space,it limits for dividing with the curtain of a race in the door, stairs, storage, etc. except for a bathroom. It enabled it to feel a spread. The level+1 floor is devided into small areas by structural narrow walls,being connected with one by the ridgeline of a roof. So there are different open feelings and the relations with the river each.

1. dining & kitchen / The west side space up the stairs is the largest planarly, and has high ceiling with a feeling of rise towards the roof top.

2. living / The central space is low ceilinged,and has full-opening windows on both sides as a balcony and the bay window that spreads outward with a feeling of floating

3. spare room / The east side space in the deepest is a form which is narrowed down to the direction of flow of the river,and is a space watching the light to insert earlier of the abyss..

4. loft / The space with two skylights is a space looking down at the river and looking up at the sky.

The limited volume snuggles up to the river, and I think that I was able to design various space that can live while looking for a favorite place to stay. 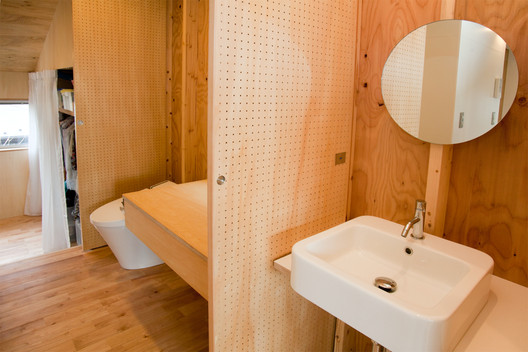