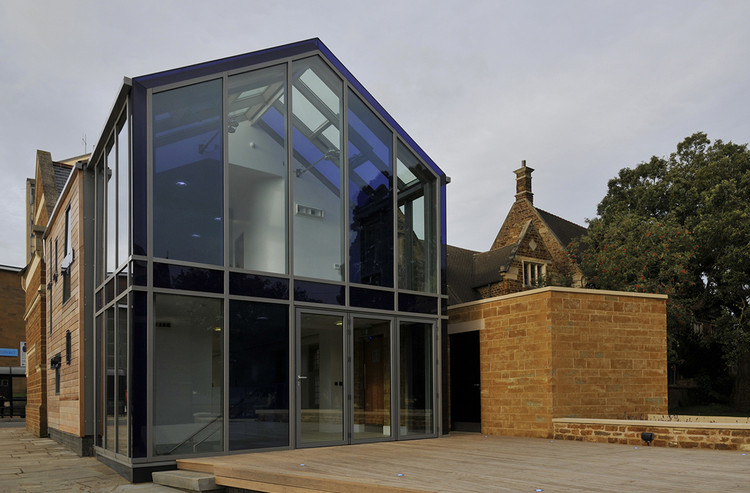 Text description provided by the architects. We were commissioned by the Borough Council of Wellingborough to remodel, extend and refurbish Grade ll listed building at 28 Church Street, Wellingborough. The brief was to bring back to life very dilapidated building and set the quality level for the rest of forthcoming development. This small building, set in the heart of Conservation Area, was meant to act as a catalyst for the Urban renewal of the town centre.

The building was originally part of church assembly buildings formed around All Hallows Church, Grade l listed building dating from 12th century. The building itself is from 16th century but majority of the edifice is from the early 19th century. At rear and the west, the site was defined by low quality 20th century extension and extensive overgrown landscaping. To the east the site was separated from the church by high walls and high shrubs. The last use of the building was storage for the local theatre company.

As the most building elements were dilapidated beyond repair, we have decided very early in the project not to emulate but to create new instead. Interior elements which were to be retained, such as stone mullions, were cleaned and repaired to a minimum and enhanced by contrasting surrounding elements. Material palette was kept simple and we used high quality finishes and detailing. In order to open up the existing building, and create vertical and horizontal flow, we designed two distinct and bespoke sets of stairs to perform as a “space shapers”.

We wanted for light to travel in and around the building. We achieved it by creating ”light axes” which follow north-south and west –east directions. This is why we decided to replace front solid doors with glass doors and completely glaze extruded form to the rear of the building. In the process we surgically opened new windows on what was previously blank west elevation. As a consequence the interior bathes in light throughout a day. Use of the coloured glass was meant to subtly reflect stained glass from the nearby church.

The first floor of the extruded form to the south is designed to act as a loggia, elevated urban viewing platform, in order to create new visual relationship with town, adjacent memorial and All Hallows Church. The external works were defined through the process of reduction. In order to achieve this we removed the garden walls and existing landscaping. We replaced tall wall with a long bench. The deck slab was conceived as an extension of internal space. 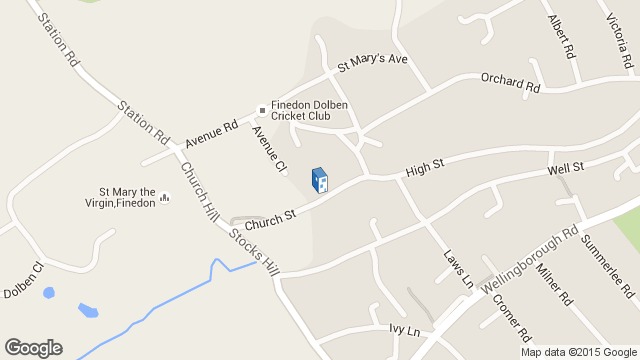 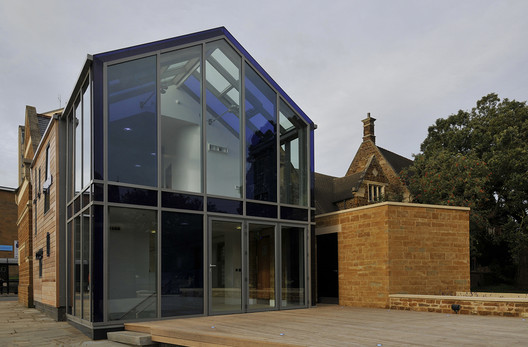