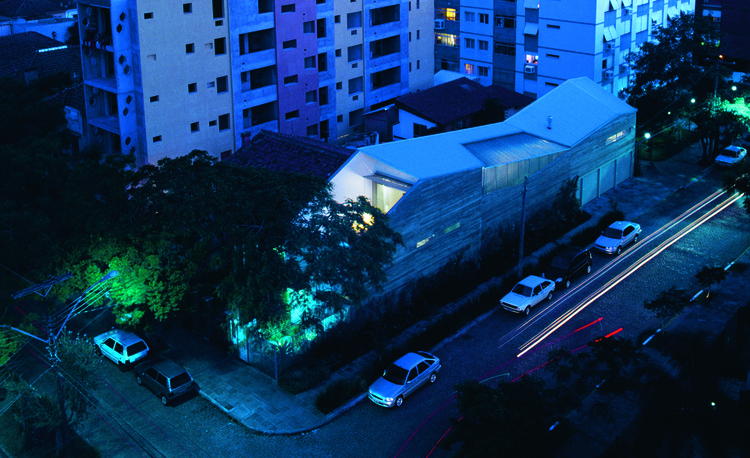 Text description provided by the architects. The project was selected to represent Brazil in the IV Latin American Architecture Biennale in October 2004 in Peru. The house makes a series of references to Brazilian modern architecture as well as adding a new element with its complex prismatic geometry, which generates a series of spatial illusions in the interior spaces.

The project is a hybrid of Brazilian and British concerns. Although the building makes reference to Brazilian modernist architecture, its form takes a more contemporary European interest in asymmetrical complexity. Brazilian elements are the implementation of local concrete engineering, open plan typology, large extrovert spaces, swimming pool, outdoor living and lush garden flora. Concrete is not used in a typical Brazilian grand engineering gesture or sculptural form, but something more discrete. Thin continuous reinforced concrete structural walls bridge over the long slot windows and garage bay, but are not expressed as beams and disappear within the skin of the building. The diagonal concrete stair beam, which angles down to support the cantilevered corridor also disappears into a wrapping ribbon line, which flows around the courtyard.

Brazilian rawness comes through using materials such as timber formed poured concrete whereas British precision is a by-product of modular steel component construction. The building skin reflects these two halves. The steel front facade cladding, roof, gutters and grillwork is all detailed in a British way. Other British elements are the structural glass of the pool, attention to detailing and the use of Brazilian plants in a less formal natural layering common to British landscaping.

The project was conceived as a SLICE built on an urban residue leftover after the opening of a new road on the west side of the site. Space is defined by a series of non-orthogonal design decisions. The space folds and unfolds within the prismatic form. It develops a series of spatial distortions, which create an illusion of greater space on this narrow plot. A series of tilted 70deg walls extend the spaces where the eye of the beholder is displaced to further planes achieving an illusion of a larger space. The tilted ceilings create forced perspective also distorting the spatial perception. People are accustomed to perceive and understand orthogonal spaces. In a more complex geometry, the eye tries to understand the space and is constantly defied by it. The space becomes richer as the user perceives conflicting information from different viewpoints.

Instead of neutralizing the linear site, Procter-Rihl decided to work with it. Entering at the small end, most of the site is a continuous open space for the social areas and inner courtyard. This long space contains the 7m continuous furniture component used as dining table, kitchen counter, and garden table. One long space gives unexpected depth to a domestic environment. In such a space, visual perception tends to tunnel in making the space appear to be smaller, but as the site is non-orthogonal increasing in width from 3.7 to 4.8m perspective is neutralized. This condition creates the illusion as if the space is bigger than it actually is. The three cross walls; front entrance, glass courtyard and bedroom are all angled 20deg off of the expected perpendicular. This elongates them and fools the eye into thinking the site is wider. The height of the main space, the upward flowing stair, and the open courtyard beyond open the space further.

The upper floor concrete ceiling folds up or down defining different spatial qualities. The stair arrives at the landing in a very open high zone. The ceiling slopes down in the corridor ahead to a very intimate 2.1m height at the bedroom door. This puts the corridor into a forced perspective, which makes the private area of the house appear further away from the social areas. Turning up the stair and moving to the guest room/pool lounge the ceiling continues a slope up opening out to the pool terrace and sky. The bedroom ceiling folds up from its low point at the door opening the space visually above the dressing unit furniture pieces to the bath beyond. The bedroom is enlarged visually while remaining a separate piece from the front public section of the house.