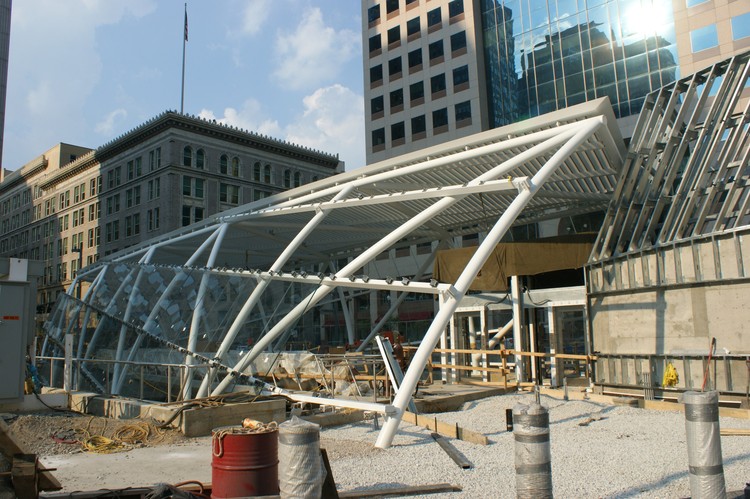 Pittsburgh is known for its world renowned view of the city experienced by travelers exiting the Fort Pitt Tunnels and crossing the Fort Pitt Bridge. The new Gateway Station is situated to serve as the terminus to this famous procession of views into Pittsburgh’s city center. Considering the importance if its location, The Port Authority along with its consultants saw the opportunity for the station to serve as the catalyst for development of the entire triangular site, which had previously been undeveloped property.

The designers developed a concept referencing this “Gateway Experience”. Using this term to describe the experience of entering Pittsburgh via the Fort Pitt Tunnels and Bridge, they sought to develop a similar experience when entering the City via the proposed under river transit tunnel of the North Shore Connector Project. A sloped plaza was designed adjacent to the station in the triangular parcel of property allows the underground track level wall of the station to be opened up to permit views out of the station into the city for arriving LRT passengers.

This Gateway Plaza serves as a view shed through which transit passengers enjoy their first views of the city. Conversely, the station platform serves as a stage for people enjoying the plaza who are able to watch people and trains arriving at and departing Gateway Station.

A number of techniques were used to achieve these goals. Working with lead project engineer, AECOM, the designers utilized conventional drawing, model building and Building information Modeling (BIM) to establish track alignments in relation to street level arrangements, and to assist in defining the extent and configuration of the station box, the headhouse and proposed civic plaza.

Using the principles defined in the RFP documents and interview process, the proposal evolved into a design solution that responds to both the needs of the Port Authority and the community at large:

• GATEWAY EXPERIENCE: Early on in the design process it was clear to us that establishing the “gateway experience” for passengers arriving at Gateway Station to celebrate their arrival to downtown Pittsburgh, should rival the motorist’s experience having traveled through the Fort Pitt tunnel, over the bridge and arriving in the city.

• SENSE OF PLACE: The Gateway station site is positioned at a critical intersection in the city’s urban fabric.

• DAYLIGHTING & VENTILATION: The station box was opened on its western side to introduce daylight to the platform.

• TRANSPARENCY: We developed a strategy to minimize visual impact of station “headhouse” on surrounding context through use of transparent materials and innovative geometries of the structural system.