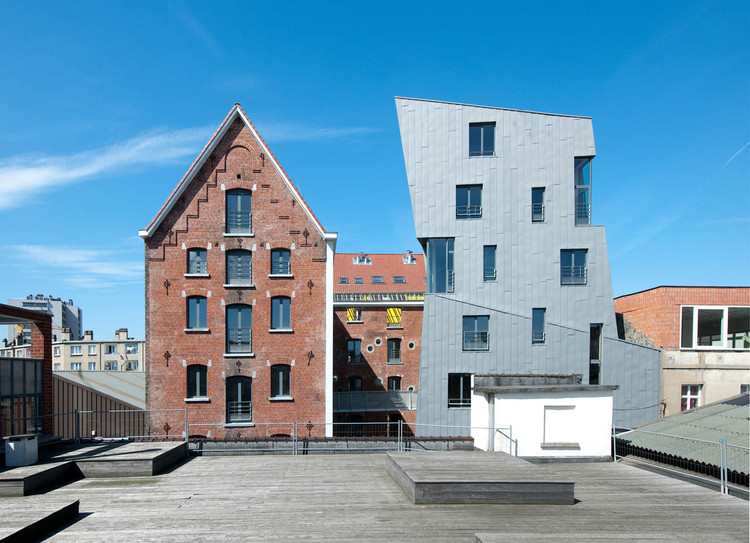 The brief of the competition, held in 2003, was to transform the building of the former Hallemans breweries into 31 housing units for artists, including an in-house workspace. On top of the transformation, a new construction was necessary to provide the needed surfaces. This new wing creates space and views the courtyard and the surroundings. To improve natural lighting, the upper part of the new building is withdrawn from the property limit, this allows nothern light to enter in the workshops.

Starting from each wing, a network of staircases and corridors, crossing the brewery and the courtyard, reaches each doorstep. This outdoor circulation provides the courtyard with a unique dynamic, and enables spontaneous meetings between inhabitants.

A New Life for Industrial Inheritance

The project seeks to integrate as much as possible all the structural and architectural elements that are characteristic of the old brewery. On this inheritance background, the necessary interventions for contemporary living are clearly identified. They create a dialogue with the existing building without imitating it.

The new openings in the old walls are radical but necessary to create a part of the new façade after demolitions or to open the southern wall. They bring a maximum of light and create views. The old chimney is transformed into a barbecue to serve as a possible meeting place for the inhabitants. The new building is clearly different from the old brewery, both by its contemporary architecture as by its zinc facade.

A Neighborhood in Search of New Breath

The insertion of the project in its urban environment can be summarized in two words: openness and visual presence. Since the site is situated between two public spaces (a street and a square), both have an entrance to the building which makes a visual connection between the two spaces. The combination of the old and the new building, both higher than the industrial halls along the Canal, can be seen from the right bank of the Canal and participates in the skyline of Molenbeek.

Quality of Spaces/Economy of the Project

In a limited budgetary context (about 1100 €/m2), we wanted to insure the quality and durability of the building (big surfaces of the openings, aluminium frames, collective ventilation system and boiler room) while using the existing or new raw materials for their aesthetic qualities (apparent bricks, vaulted ceilings, concrete) and for their technical qualities (re-use of the existing bearing system, thermal inertia of the existing brick walls). The choice of standard sanitary and technical units (bathroom and kitchen) follows the same line of thought. 19 of the 31 units are interlocking duplexes, which permits privatizing the apartments by detaching one of the floors from the circulation core (which is then reduced). The sanitary blocks are concentrated in compact modules, gathered around a minimum number of vertical sleeves. Except for the bathrooms, the apartments are delivered without internal partitions, allowing maximum flexibility for the users.

Resulting from a competition launched by the Woningfonds of the Brussels-Capital Region, the housing units/studios for artists participate in the urban morphology of the Canal surroundings. After two years of works, the first inhabitants are now ready to move in. With the spatial and economical challenges of the architecture fulfilled, it is now time for other challenges: the management of public housing with an artistic dimension and its integration in the social context of the Molenbeek district.