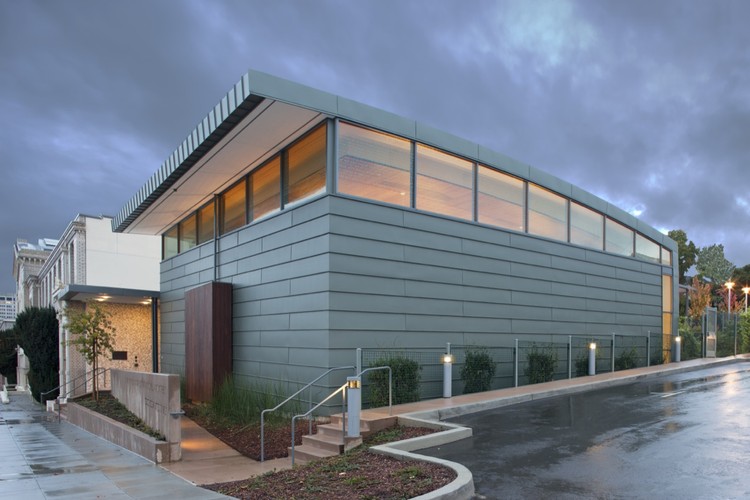 Text description provided by the architects. Temple Sinai, the oldest and largest East Bay Jewish synagogue, has grown around their 1918 landmarked sanctuary with new buildings in a way that has disassociated all of their different activities. The Temple’s new building program included a new chapel, classrooms, a preschool, administrative offices, and a library, but most importantly the temple wanted a new design to organize these disparate elements into a place where their congregants could feel a greater sense of community where people could meet each other in casual spaces for spontaneous conversation.

A circulation spine, which runs the length of the building and joins all programmatic elements, has a wall of mosaic stone tile of the same length and material as one of Judaism’s most sacred sites, the Western Wall in Jerusalem. This is the space where all parts of the temple community meet and to which are attached three jewel-like building objects wrapped in green-tinted zinc cladding: the chapel, the community living room, and the library.

Other architectural details and spaces draw heavily on Jewish history and tradition as well; the chapel inspired by the tallit, or prayer shawl, enfolds worshippers in wood slat walls and ceiling (forming a continuous band) recalling the wooden shuls, the pre-war synagogues of eastern Europe. By day one can look through the text of the v’ahafta, a prayer central to Jewish practice, on the high band of windows to see sky; by night the prayer’s white letters stand out against the dark. Along the stone mosaic wall are weathered copper plaques with quotes from Jewish scholars and poets.

Temple Sinai is very much a part of the larger community around it, and to that end they wanted openness where views into the buildings and out to the City of Oakland were maintained. This sense of community goes further with the Jewish concept of tikkun olam, “repairing the world,” and to this end LEED certification was an important goal.

Temple Sinai was a collaborative effort between the offices of Michael Harris and Mark Horton, under the MH2 moniker. While running independent offices, Michael Harris and Mark Horton have shared space, ideas about architecture, and support for over 20 years. Throughout this time period, the two principals, as well as their offices, have relied on one another to exchange ideas, solicit critiques and feedback on projects, and support each other's endeavors; while the offices are distinct and separate firms, they share the common goal of creating great architecture for their clients.

While good architecture can be the product of a singular vision, a collaboration of ideas and approaches, as was the case with Temple Sinai, can produce great results. Michael Harris and Mark Horton's complementary approaches to the design process resulted in a whole which was greater than the sum of its parts for Temple Sinai. In this case the client was the beneficiary of two principals, and two architectural firms, who contributed a much broader spectrum of ideas, capabilities, and design sensibilities to the project than would have occurred if only one were involved.

Michael Harris and Mark Horton have worked together in the past, most notably on the Good Samaritan Family Resource Center and Housing project, and the two firms look forward to the opportunity to work together again. 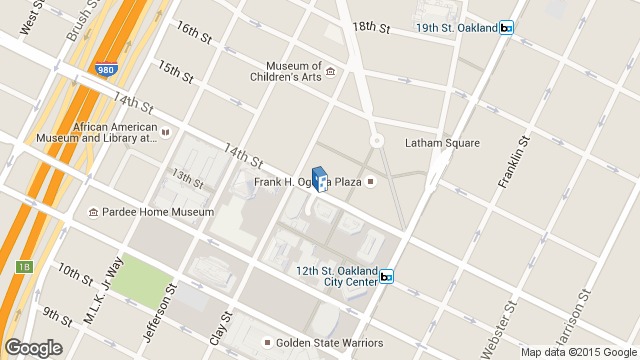