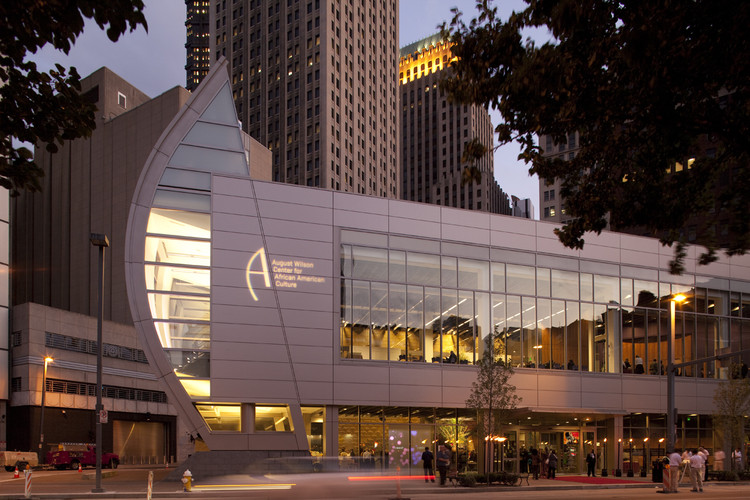 Text description provided by the architects. This energetic, urban in-fill building is a transformative first-voice cultural center that celebrates the contributions of African Americans to American culture, art, music, and theatre in the region and globally—past, present and future. Designed by Perkins+Will, the two-story, 64,500 gsf facility includes a 486-seat proscenium theater, 11,000 gsf of exhibit galleries, a flexible studio, a music café, and an education center. Named in honor of August Wilson, a native son and world-renowned playwright, this forward-looking, one-of-a-kind hybrid institution engages the broad and complex diversity of this culture in its home city and beyond.

Strategically composed on a tight triangular site, the building exploits the moment where two city grids converge and the Cultural, Convention and Downtown Districts overlap, forming a gateway intersection. The Center celebrates the corner with a robust curvilinear form inspired by the full sails of the dhow, the majestic sailing ships that transported Swahili culture from East Africa. In a context of heavier, more opaque buildings, the curve breaks the norm and anchors the corner as urban art.

The building is a composition of highly controlled, programmatically specific volumes and flexible public space. At both levels flexible uses are organized behind the north-facing glassy façade that extends 328 linear feet along one of the major downtown thoroughfares. With optimum solar orientation, this transparency invites the surrounding historic context in to enrich the interior experience and engage the place in the city. The building is a giant picture window framing the constant transformation, evolution and influence of African culture, active and glowing proudly from within. At nighttime this is most profound.

To acknowledge the significance of the street as common space and as a stage for urban life, the sidewalk slides into the building, connecting the street level uses. Open ceilings with linear baffles, ceiling rigging, graphic scrims and sealed concrete floors establish a functional theatrical aesthetic. The second level overlooks the street, porch-like, and two large pivot doors subdivide the long space, yet allow crowds to move fluidly between spaces during events. The highly controlled exhibition galleries absorb the triangular site geometry and are situated behind the sloped stone wall illuminated at night and glowing with abundant indirect north light during the day. The formal stair moves against the stone wall and is the zipper between the galleries and flexible spaces that line the long axis. The south east facing façade is windowless, activated with a glowing light strip and processional banners. The regal purple drum-shaped theater dowels the two floors together.

The greatest challenge was to accommodate such a complex program on the site. The Center can accept Smithsonian exhibits, has a theatre venue that can fly full scenes, and transforms its daytime café into a speakeasy music café at night. Last year, because of its central location and state-of-the-art infrastructure, the Center was the media command central for the G-20 Summit feeding bloggers and news media desks globally. 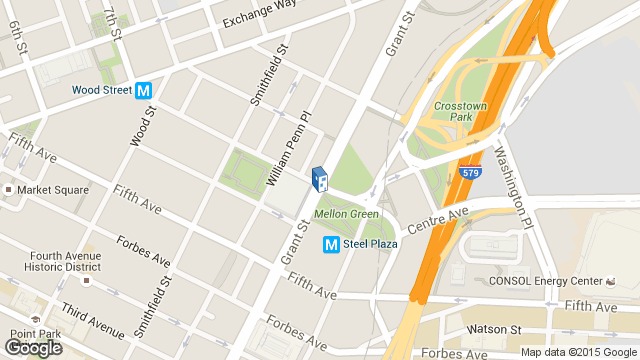 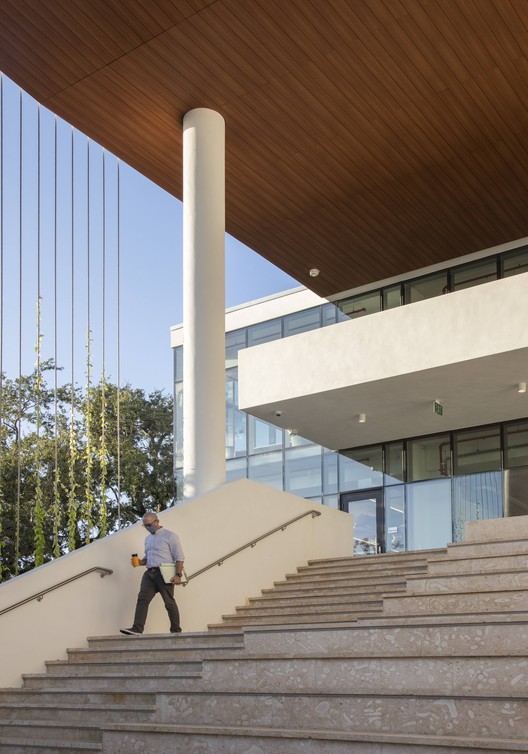