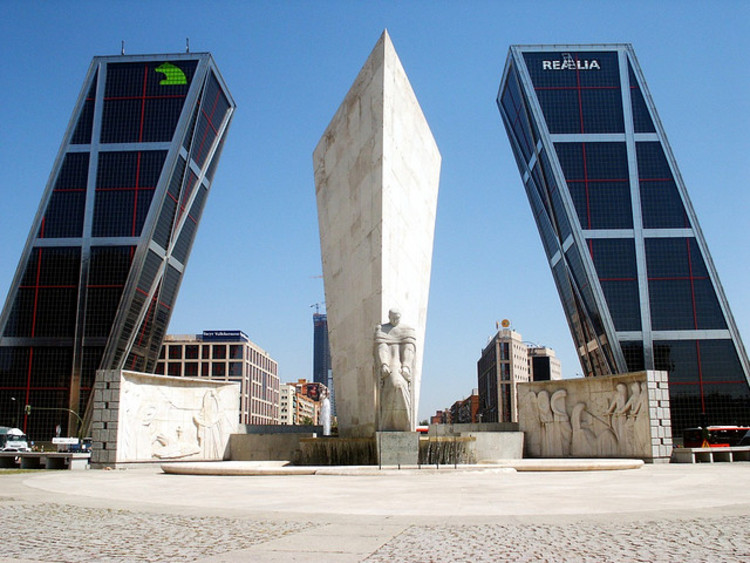 Text description provided by the architects. The twin office towers known as Puerta de Europa I and II located in Madrid, Spain defy the typical conventions of skyscraper construction. Designed by American architects Philip Johnson & John Burgee and commissioned by the Kuwait Investment Office (KIO), these structural expressionistic towers straddle one of Madrid’s most important boulevards – the Paseo de la Castellana. More details after the break.

Situated on prime real estate next to the Plaza de Castilla, there could not be a more suitable location for these two towers. However, in order for construction to be feasible, a significant setback from the street was required in order to clear a subway interchange. What one architect may see as an obstacle, Johnson and Burgee saw as an opportunity to explore an unconventional avenue of architecture in order to realize a proper solution. Thus, with the remaining plot of land they designed the world’s first inclined skyscrapers, with structural engineering carried out by Leslie E. Robertson Associates and construction by Fomento de Construcciones y Contratas.

Rising to 114 meters at an incline of 15 degrees, these towers stretch 30 meters from their base over Paseo de la Castellana. A 60x10x10 meter concrete counterweight located on the opposite side of inclination underground and connected to the top by cable provides the necessary resistance to counteract the forces trying to overturn the towers. A primary diagrid of structural steel on the perimeters of the building and a reinforced central core housing the main vertical circulation serves to further strengthen the buildings. Secondary horizontal and vertical structural steel members serve to strengthen the diagrid members and provide the necessary lateral stability. Typically, these elements are hidden in this type of construction. However, the design team chose to highlight these elements in a clean but very informative manner, resulting in a structure that can be read and deciphered from the pedestrian perspective. The primary structure is clad with stainless steel with the secondary horizontal and vertical members clad with red metal. A dark reflective curtain wall with charcoal mullions comprises the infill between the structural elements. In order to differentiate the two, the west tower features a blue helipad on the roof, while the east was fitted with a red helipad.

The inclination of the towers not only serves to clear the subway interchange below, but also guarantees the visibility of the towers down the length of Paseo de Castellana. Since they mark the Northern end of Madrid’s business district, they are often referred to as the metaphysical gateway to Europe. The analogy suits the towers well, as their composition with the boulevard and plaza help define the void, massing, and entry to a central hub of both transportation and pedestrian movement, and the gateway to the rest of Madrid. Interestingly, it also parallels the likeness of ancient medieval gateways of Madrid such as the Puerta de Sol, Puerta de Guadalajara, and Puerta de la Vega of the 12thcentury.

Philip Johnson and John Burgee’s decision to break the mold of vertical linearity resulted in a construction unlike any other. Their structural expressionistic qualities lend credibility and honesty of form and function that many towers simply ignore. These two iconic skyscrapers continue to boldly defy the laws of gravity, and have undoubtedly served as inspiration for the numerous canted towers in the following decade. 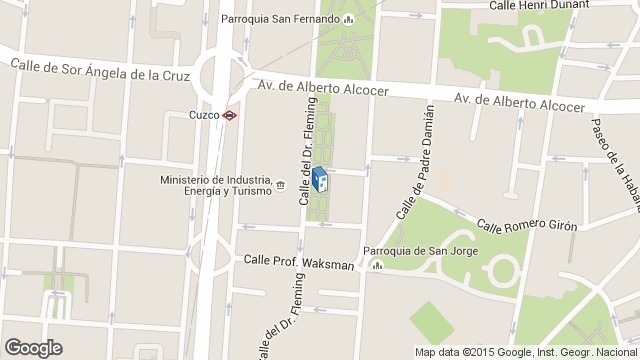