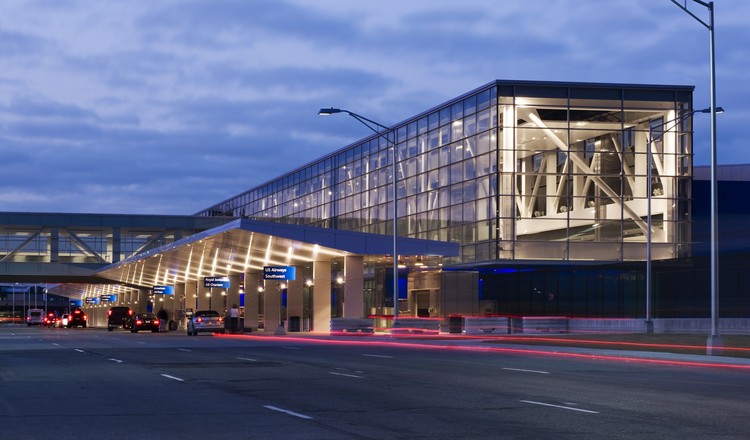 Text description provided by the architects. The 12th-busiest airport in the United States, Detroit Metropolitan Wayne County Airport (DTW) serves as a global gateway to Metro Detroit. Opened as a model of post 9/11 terminal design, the airport’s new North Terminal is enhancing DTW’s status as one of the most modern and efficient airports in the world. Gensler designed the terminal to meet the dynamic needs of today’s travelers. The 26-gate, 824,000-square-foot terminal met stringent budget requirements, and establishes new benchmarks for value-conscious airport facilities. A tremendous time saver for travelers, the terminal’s linear design will also create a faster, more efficient path for taxiing aircraft that will save fuel and reduce environmental emissions. More images and information about DTW's North Terminal after the break.

The highlight of the terminal’s design is a 660-foot-long glass box that forms a gateway foyer. Set over the curb, this glass box is the one space through which every passenger passes. It ushers natural light into the check-in, baggage claim and security screening areas. Exposed structural steel, vivid color, abundant natural light and modern building components recall the confident manner in which this region has always addressed its challenges, offering innovation, utility and ambition to the rest of the world.

The new North Terminal is an origin and destinations terminal, as opposed to a connecting hub through which passengers travel without emerging. Most connecting hub terminal buildings minimize design at their external entrances in favor of highlighting internal spaces on the secure side of the terminal. The opposite is true here; the big architectural statement occurs at the curb.

The North Terminal is equipped for common use terminal equipment (CUTE) to provide enhanced flexibility that both reduces costs and provides added passenger convenience. Hold rooms feature views of the airfield, natural daylight and digital displays alerting passengers to any potential flight updates and boarding information. Because today’s travelers are dependent upon personal electronic devices, ample electrical outlets are available.

Most of the terminal’s amenities are located past Transportation Security Association (TSA) screening, where today’s travelers spend the majority of their waiting time. Food courts at each end of the concourse feature dramatic lighting, access to daylight and exterior views. The terminal’s linear design enables aircraft to pull directly into their respective gates off the taxiway independently of one another. The linear configuration eliminates traffic jams typical of airports that feature alleys, piers or banjos. This efficient, conservative motion offers airline operators energy benefits and time savings, while enhancing airport safety by minimizing taxiway traffic.

To mitigate the stress of passing through security, Gensler designed the TSA screening checkpoints as gateways featuring warm finishes such as wood grain and carpet. To further the intimate nature of these thresholds, ceiling heights are low, and the overall effect is one of a gateway rather than a checkpoint. Bold, vibrant blue is used consistently throughout the terminal to indicate entry points, from the entrances at the curb to the jetbridges joining each gate to planes Unique lighting fixtures then signal important junctions, such as low-hanging globes in the food courts and vertical pipe-like lights at the intersection where arriving passengers turn away from the main terminal to head toward baggage claim and ground transportation.

Much of the waste from the demolished Davey terminal and adjacent hotel was recycled for use in the new terminal. Concrete, which made up the bulk of the old buildings, was crushed into gravel and used for roads and ramps. Reusable iron and steel was extracted from various parts of the old structures and recycled while plumbing fixtures from the former hotel were donated to Habitat for Humanity's resale shop.

In recognition of DTW’s commitment to environmental excellence, DTW was awarded a Voluntary Airport Low Emissions (VALE) grant, totaling nearly $5.1 million by the FAA to support the airport’s plan to reduce operational emissions at the new North Terminal. Funding from the grant will be used to support the construction of infrastructure to deliver fuel, temperature-controlled air, and auxiliary electrical power directly to aircraft parked at each new boarding gate. Together, these three systems will eliminate the need for, and emissions associated with, mobile fuel trucks, on-board auxiliary power units (APU’s) or diesel-powered protable ground power units— thus reducing fuel consumption and associated emissions.

Altogether, the North Terminal infrastructure supported by the VALE grant is expected to spare the environment from more than 418 tons of carbon monoxide, 409 tons of ozone precursors, 366 tons of nitrogen oxides, 66 tons of sulfur dioxide, 42 tons of volatile organic compounds, and 6.4 tons of particulate matter over the equipment’s 40-year lifespan. 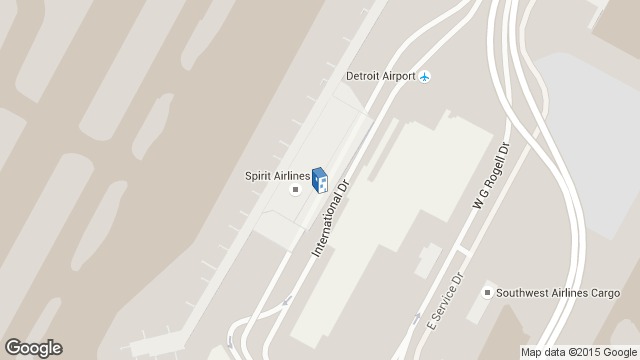