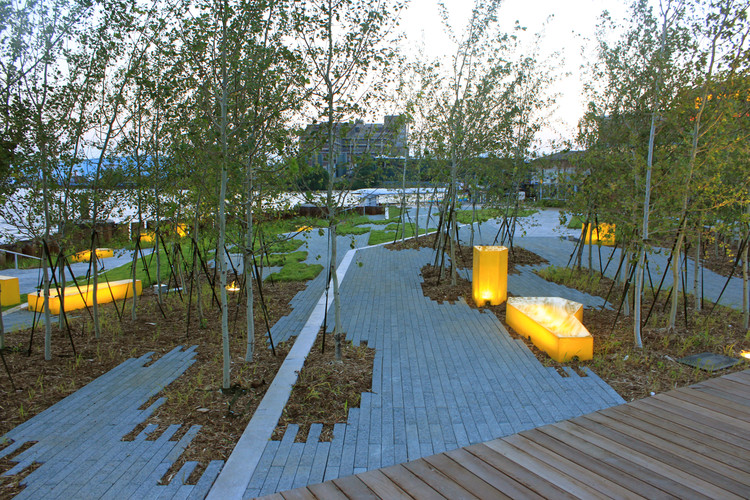 Positioned on the edge of the Federal Channel and Lake Michigan, Erie Street Plaza by StossLU is a new public space that serves to connect downtown Milwaukee to a newly revitalized outer zone of the city. It is part of a three mile long green corridor that promotes activity along the city's reclaimed waterfront for public use. From the project's inception, its form progressed under the principle of maximizing programmatic, environmental, and ecologic variety within the space while recalling the site's industrial past and surroundings through use of three primary elements.

Viewing the park as a "flexible field" was key for Stoss in creating a design that could behave in a way that would parallel its ultimate use. That being said, aesthetic and built variety is attained within the park by the formal manipulation of three elements or "hybrid ecologies." The radiant grove, the flexible field, and the steel marsh step down from the edge of the site towards the water. Each distinct zone houses varying program, views, and ecologic characteristics.

Incorporated into all three areas, a paver of variable density and orientation and a wood decking foster general movement throughout the site without acting as a restrictive barrier to specific activities. Luminous fiberglass seats prevalent throughout the park serve to act as nodes of density as lighting conditions change towards nightfall.

The highly variable ecologic opportunity provided by the site's proximity to Lake Michigan present a further degree of flux within the site. The steel marsh, located behind a slitted corrugated steel bulkhead, allows for the penetration of water into the site in a way that can restrict access to its lower portion depending on water levels within the lake. This reclaimed soft-edge of the water restores a visual marker of the shifting environment and promotes ecological growth at the site.

Ultimately, the idea of fostering flexibility through varied ecology present within the design of Erie Street Plaza can be seen as a model for further urban reclamation projects that aspire to provide complex contextual and programmatic relationships with a clear organizational and material logic imbued within. 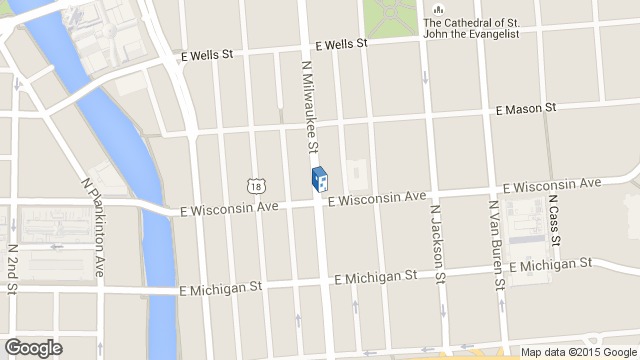 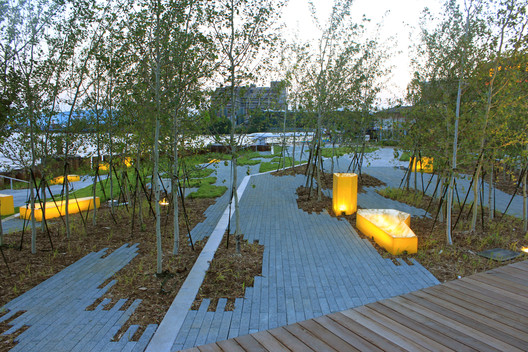