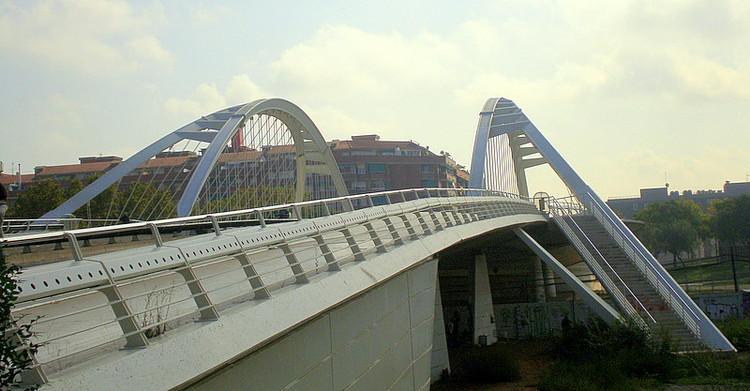 Text description provided by the architects. The Bac de Roda Bridge by Santiago Calatrava marks his first foray into bridge design. Part of a larger development plan in preparation for the 1992 Olympics in Barcelona, the bridge functions as both a symbolic and physical connection to two previously disjointed districts; Sant Marti and Sant Andreu. More information after the break.

Located in the northern section of Barcelona, the city council desired something much more than a simple bridge. They wanted an icon that would breathe new life into the two lesser known and visited districts of the city, and reflect their new ambitious revitalization initiative. The bridge connects the roadways Felip II and Bac de Roda that run parallel to the sunken train track corridor.

The bridge consists of a roadway in the middle, bounded by pedestrian walkways on either side. While a simpler approach could have been taken at less expense, Calatrava’s design aesthetic embraces the detailing and exhibition of structure to frame and create spaces of experience.

“In bridge design there is a certain exercise in engineering aesthetics to be undertaken, and I feel that the integration of technology and aesthetics deserves special attention.” – Calatrava

With this in mind as a guiding principle, the defining structural elements of the bridge take on the form of parabolas. Two vertical steel arches rise above and frame the middle roadway. Suspended steel cables from the arches provide the necessary support for the vehicular traffic portion of the bridge deck. The vertical arches are stabilized by canted arches that converge at the apex, preventing them from racking. Pedestrian walkways on either side of the roadway are suspended via cable stays and increase in width at the midpoint of the bridge. The profile and positioning of the structure is indicative of the forces acting upon them. This is evident in the tapering of the profiles at the top of the arches and the widening at the bases. A unique spatial balance of mass and void is achieved by positioning the structure at the peripheries, allowing an uninterrupted through space above the roadway deck. Sensitivity between the site and the bridge is ensured by limiting the height of the arches relative to those of the local buildings.

Passing through a set of stairs, pedestrian access departs from the ground plane and ascends following the form of the curvilinear form of the arch. Calatrava increases the sensory experience while traveling underneath the fan shaped cable stays and the converging arches; He creates a journey entirely distinct from that of the vehicular. Night time visibility is handled through recessed lighting in the handrails, while roadway lighting occurs via the vehicular median.

The majority of structure above the bridge deck is matte white painted steel, while white concrete comprises the below deck support and abutments. This material palette is enhanced by the integration of shadow play; a trompe l’oeil effect is achieved by angling out the pedestrian deck and thus darkening the underside. This creates the illusion that the deck is much thinner than in reality. The cable stays serve to further delineate and enhance the visual spectacle.

Santiago Calatrava’s first bridge remains a great example of the positive influence of architecture on its immediate milieu, where it is affectionately called the Calatrava Bridge by locals. His now well known use of anthropomorphic inspiration in bridge design departs from traditional preconceived notions of bridge construction. The immediate area is currently part of a future development of Sagrera Linear Park, which will complement the original vision with the addition of landscaped public areas around and beneath the bridge. 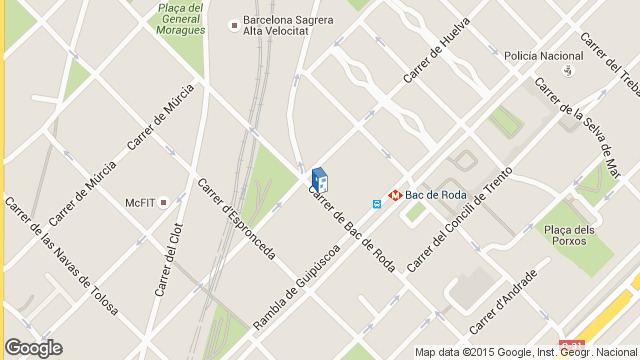