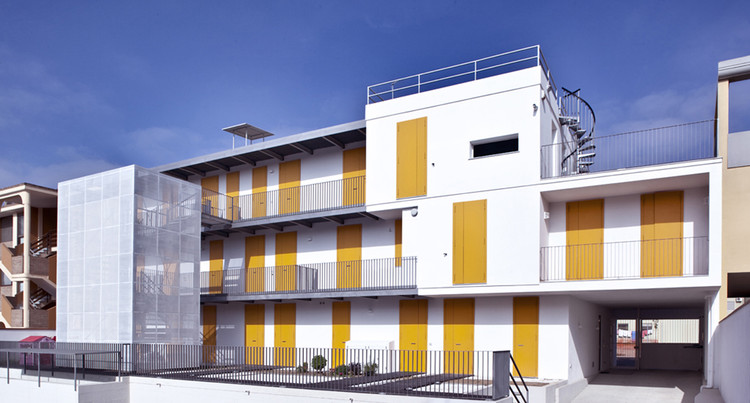 2+1 officina architettura has recently completed a housing project in Elmas, a small town in the south of Sardinia. The office, which finds its field of action between artistic design and architecture, seeks for experimentation within contemporary design thinking, 'aiming for the development of contemporary art and architecture and directing their own intellectual, professional and human resources for the improvement of society and ethics'. Amid a building context fully regulated to prevent and constrain rather than experiment with new architectural solutions, 2+1 has demonstrated how to make the best of it, turning those constrictions upside down.

Strictly aligned along the street, the new housing structure stands out from the surroundings with its white colour, which serves as a flat canvas for the mustard-yellow composition of the shutters. These windows, in two different sizes, create a vibrant and binomial play of open/closed. Entrance to the different housing units is achieved through the inner courtyard. Here the secondary, southeast facade results in more articulation in terms of volume, highlighting a continuous covered balcony that connects the mesh-covered exterior staircase with the different units. Both the facade's disposition of openings and its colour palette recall the street appearance.

Some elements, such as the balcony cantilevering 1,5 meters from the vertical plane of the facade, or the exterior staircases, find an alternative shape in order to fulfil the programme requirements. The expertise of the designers makes it possible to undress the redundant layers, getting the most out of the essence and core values of those elements. With this newfangled and engaging design, 2+1 definitely challenges a building practice characterized by a market rule approach.

The north-south orientation of the two facades has an effect on the disposition of inside spaces, relative to the sleeping areas placed at north and living areas paced at south. The summer solar radiation on housing units is controlled through a walkway balcony / brise soleil screen, which depth is evaluated in order to respond in a best way to the different variation of solar radiation, both in summer and winter. On the north side, full shutter panels work as further protection by cold north winds.

The optimization of economic resources is reached through a synthesis of the building geometry, a wise selection of construction material, and technologies readily available in the territory. The use of material such as Abet laminate Meg permit high performance of weathering resistance with a reduction in construction costs.

The entrance to each housing unit is granted by an inside court, served by an external stair and walkway balconies. This solution guarantees the social security relative to a periphery contest where the building is set and, at the same time, benefits to cohabitation and social integration. 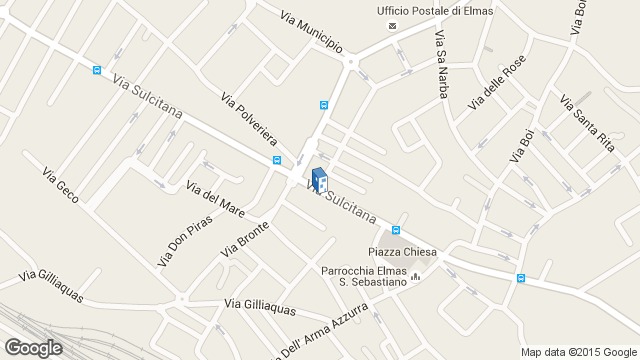 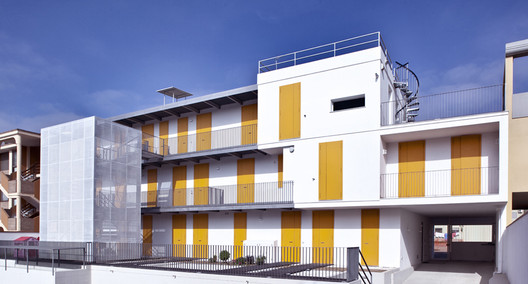