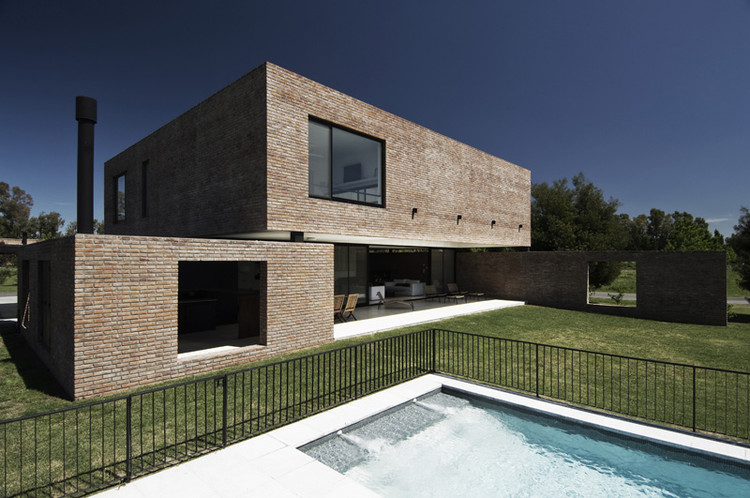 Text description provided by the architects. The project consists of a single family suburban house placed within a corner plot in a traditional Country Club in the Pilar area, Buenos Aires, Argentina. With a surface area of 1100 sqm, the site forms part of a new extension of the Club, resulting in an almost inexistent urban context, deprived of both neighboring houses and grown vegetation. The only significant influence surrounding the plot is the adjacent par three golf course. The plot is completely flat and there is no physical limit between the golf course and its northeastern border, resulting in a magnificent view which also coincides with the best sun orientation.

The internal regulation of the Country Club, including a strict limitation to the buildable area and its limits regarding the neighboring buildings, generates a very large urban sprawl with lots of space between houses. This results in large green open spaces, enabling you to connect with the natural surroundings, a characteristic not common in other suburban developments such as this one. On the other hand; these same characteristics, combined with the client’s desire to use the maximum area allowed, often result in a very compact rectangular volume, sometimes dull and devoid of expression. This is the main reason why most of the houses in this neighborhood tend to concentrate on the outer spaces (so common in this type of climate) by using lightweight structures attached to the main volume, thus compromising their own formal logic.

These strong factors, existent in most of the houses within this area, are taken as the principal ideas for our project. We chose to exteriorize the volume, instead of hiding it, exploiting all of its possibilities. We first, expose it, and then apply different articulation mechanisms to create a variation of spatial relations between the different factors present in the projects program. We slice the volume horizontally dividing the daily functions from the private ones. Then we cut, rotate and translate the lower walls so as to gain contact with the exterior at ground level, without giving away the required privacy.

One of these articulations creates an entrance courtyard towards the western corner. Its perimeter walls provide privacy, protect the interiors from the harsh western sun, and extend inwards, generating a programmatic and symbolic promenade. The other articulations protect the main and exterior areas from the surrounding street, and provide room for an outer kitchen and a service patio for the basement.

The program for this house is that of any other of its type, it is the treatment of the limits between each space which adds complexity to the final plan. It was established from the first moment the importance to make a separation between day and night activities. The ground floor plan is dedicated to daytime activities. Its plan is open so as to connect with its exterior surroundings, at the same time a conscious effort is made to conserve the privacy of its inhabitants and also retain the buildings domestic scale. There is a fluid connection between its spatial units, the kitchen and the guest toilet (being the only closable rooms). An open staircase dividing the living and dining room, has a balustrade made up of thin metal bars, which seemingly open up as the observer moves around its lower space. A piece of furniture, specifically placed at a change of floor level, also allows for a one-way visual connection to be made between the two spaces. These are some of the strategies implemented to induce a playful separation between spaces.

The outdoor terrace is integrated as a special unit within itself, with the same length, width and double height of the living area, this important feature becomes the most utilized space in the house. Large retractable glass doors separating this area from the living room allow for the two spaces to be unified and promote use throughout most of the year. The outward projection of the lower brick walls, together with its rectangular openings, guarantees privacy while generating ambiguous limits. This insinuates a fluid succession between interior and exterior.

Apart from the visual connection between the linear hallway and the living area (in double height) the first floor plan is formed by a simple succession of bedrooms and bathrooms. All of the rooms extend themselves to the exterior through big glass openings, each room towards a different site. It is intended to individualize the bedrooms by providing them with a different scene and light quality. This also generates the increase of mass in all of the upper floor facades, giving the house its monolithic character.

Natural light has been essential in this project. The ground floor plan has been designed so as to avoid direct sunlight. The indirect light provides the rooms with a very particular quality, uniform and constant throughout the day. Together with the double height ceilings and cross ventilation the necessity of using a mechanical cooling system can be avoided.

With regards to the materiality of the project, the decision was made to repeat the use of the Chacabuco brick, seen in the club house and its surrounding buildings, to create a dialogue between the project and its environment. The module of the brick is present in the project both in the general proportions of the top volume and as the direct articulator of the relationship between mass and void. On the main level, clear granite is chosen for both interior and exterior floors and a plaster finishing is used on the interior walls throughout the house. Wood is present in the two leveled ceilings of the gallery. All windows are in an anodized black, a colour shared with the exterior wall surrounding the kitchen.

The project aims to represent a synthesis of its contextual conditions. On the one hand, the already limited constraints of an isolated single family house with its requirements, such as connections, privacy and security in this non-permeable area. And on the other hand, the acceptance of the existing constructive pressures as an enabling and legitimizing design strategy.