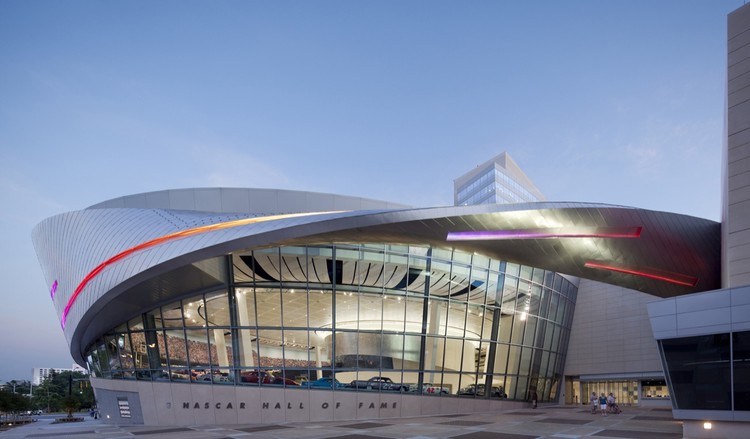 Text description provided by the architects. In approaching the challenge of designing a Hall of Fame for NASCAR, Pei Cobb Freed & Partners sought to capture the essential spirit of NASCAR and its sport in architectural form. In exploring the possibilities for expressing speed and spectacle, they were drawn to the arena of action, the racecourse, where fans and race teams come together each race week for the spectacle of race day. Curving, sloped forms are evocative not only of the dynamic and changing sinuous shape of the racetrack but also of the perception of speed, which is at the heart of the NASCAR spectacle.

An important part of Pei Cobb Freed & Partners’s design strategy was to locate NASCAR Hall of Fame Plaza, a sweeping forecourt that welcomes visitors to the Hall of Fame, on the northern edge of the site, poised toward the pedestrian traffic and energy of uptown Charlotte.

The Hall of Fame consists of four basic elements. First, a large glazed oval shape forming a Great Hall serves as the symbolic core of the Hall of Fame and a primary orientation point for the visitor. Second, a rectangular volume houses visitor services, including entry and exhibit space on the upper floors. Third, an expressed Hall of Honor is situated as an iconic element within the Great Hall. Finally, a broadcast studio, serving as an origination point for a variety of radio and television broadcasts by NASCAR’s media partners, enlivens the Plaza.

The results of Pei Cobb Freed & Partners’s explorations of speed and spectacle evolved into an architectural element they call the Ribbon, which envelops the varied program elements in a form that speaks to the imagery and spirit of NASCAR. Beginning as a curved, sloping exterior wall enclosing the building, the Ribbon twists in a free span over the main entry to form a welcoming canopy. Inspired by the dynamic quality of speed, captured in a second as a blur on film, the long, thin incisions in this metal skin are analogous to the blur of a car racing past the spectator at tremendous speed.

On the interior within the Great Hall, a signature element of a curved banked ramp leads the visitor from the main floor to the exhibit levels above. The ramp contains a display of race cars frozen in a moment from a race, capturing in another way the speed and spectacle that is the essence of the sport.

NASCAR Tower is a twenty‐story office tower anchoring the southeast corner of the full city block development that is the Hall of Fame Complex. Located at the intersection of the Caldwell Street freeway interchange, the tower is designed as a gateway to the city and to blend with the iconic design of the Hall of Fame. The tower form follows the lead of the Hall of Fame, consisting of a curvilinear metal and glass curtain wall contrasted with a rectangular precast concrete armature. 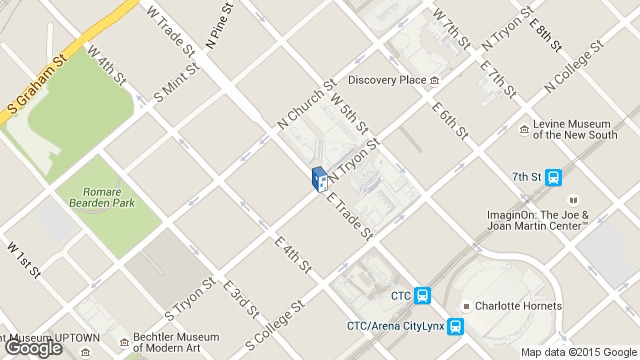 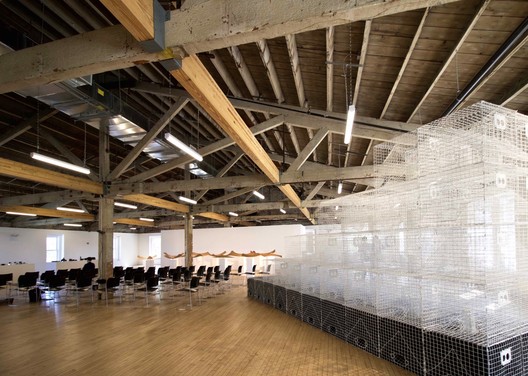 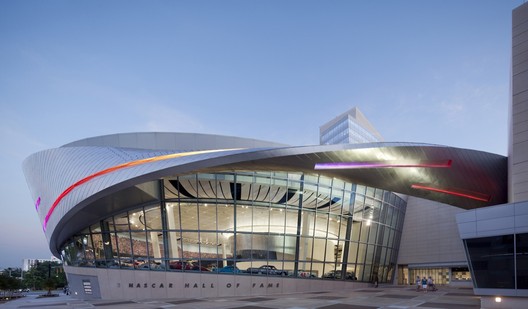