Most topping up on rooftops is done for two reasons: a need for additional space and the desire to live or work high above the city rooftops, closer to heaven than to other people. Dutch architecture firm designed an extension for the Didden family on top of an existing monumental house and atelier. The attic storey of the house below is extended by a sky-blue parapet. Behind it two gables of the same colour can be seen. It creates a crown on top of the monument. The extension is an example of the growing trend to exploit the urban roofscape for new living and working spaces.

The bedrooms are positioned as separate houses, optimising the privacy of every member of the family (one for parents and two adjoining children’s rooms). The houses are accessed via a suspended spiral staircase from the loft-like living room. The two spiral stairs to the two children’s houses coil around each other to form a double helix stairs. The houses are placed on the large rectilinear roof surface in such a way that they form a small number of outdoor spaces (houses, squares, streets and lanes) that make up a rooftop village.

The ‘village’ is enclosed by a parapet with windows that offer views of the street. Trees, tables, open air showers and benches added, optimising the rooftop life. By finishing all the elements with a blue poly-urethane coating a new heaven appears.

Unlike many similar projects, the Didden Village does not simply offer its owners additional living and sleeping space. It actually functions like a real small village, with alleys and courtyards equipped with benches, tables and a pool. Shoulder high parapets create the necessary air of privacy.

“The addition can be seen as a prototype for a further densification of the old and existing city. It adds a roof life to the city.” MVRDV 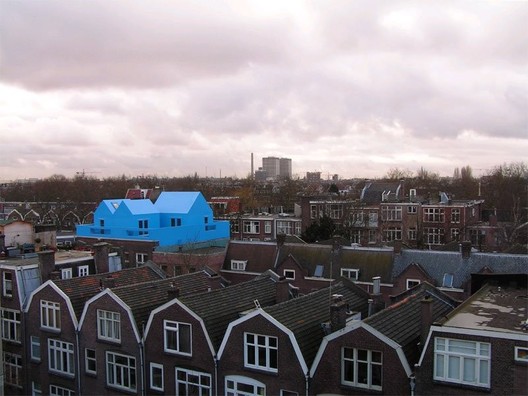