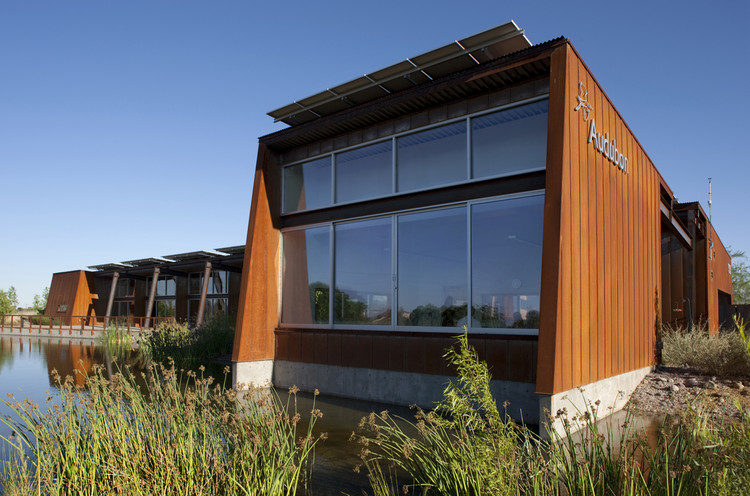 Text description provided by the architects. The Rio Salado Audubon Center sits at the heart of the $100M riparian habitat restoration along Rio Salado river corridor which transformed an urban scar to an ecologically rich riparian area. Audubon’s mission to conserve and restore natural ecosystems focuses on birds and other wildlife along with their habitats. Constructed on a brownfield site, the Audubon Center restored the barren site using native landscape and earned the first LEED Platinum Certification within the City of Phoenix.

Historically, the brownfield site on which the Center was constructed had been used for sand and gravel operations, landfill, automobile storage and construction staging. As a result, the site was left graded and virtually barren. Bioswales in conjunction with new native vegetation have reduced pre-development stormwater runoff quantities by two thirds. The goal of the landscape design was to immerse the Audubon Center visitors in the natural landscape. The Center’s landscape palette included only native plants historically found along the Salt River corridor. Divided into “habitat zones”, the site meets environmental goals while educating visitors of the differences between various river habitats.

The Audubon Center is designed to choreograph the visitor's experience by sequencing and framing views. The visitor enters the Center by passing through a mesquite bosque to an entry court. Canted weathered steel walls create a canyon like passage leading to the entry. From there visitor's views open north to the wetland, the river corridor and the city’s skyline beyond. Sliding glass doors pocket to open the space to the view terrace creating a true indoor / outdoor space.

The long, low east / west orientation reduces heat gain. The building shuts itself off to the hot southern sun while opening to the northern light and views. Thoughtful window placement and sizing provides over 85% of the building’s regularly occupied spaces with daylight, enough that artificial light is unnecessary for most daily tasks. 100% of all regularly occupied spaces have visual connection to the outdoors; the entry courtyard, the hummingbird garden, and / or the wetland.

In desert environments water is a key resource. The Audubon Center is equipped with an on-site waste water system capable of treating up to 420,000 gallons annually. Toilets, urinals, sinks, drinking fountains and the employee shower are connected to this system which cleans then reuses the water for sub-surface irrigation. The need for a city sewer connection is eliminated, reducing the load on municipal facilities. This technology, in conjunction with dual flush toilets and waterless urinals, saves 23,000 gallons of potable water each year. The plumbing system is not the only water conserving feature. Over 111,000 square feet of native vegetation planted in naturally occurring densities and irrigated using a programmable drip system saves 360,000 gallons of water annually, a 72% savings.

Energy efficiency is another strong feature of the Center. A 26.4Kw roof-mounted, grid-tied photovoltaic array provides an estimated 40-50% of the building’s energy requirements. Energy optimizing CO2 sensors have been installed as part of the mechanical system and occupancy sensors are tied into the lighting system. Energy modeling has shown that this combination of strategies leads to a 50% more efficient building when compared to similar baseline models.

Taking a brownfield site and restoring native habitat was the highest environmental concern of the design team. Efforts included restoring over 75% of the site with new native habitat. Volunteers planted over 180 trees providing cover and forage for wildlife. For proof that the restoration effort is working one only needs to look at the number of birds in the area. Before habitat restoration began, 40 species were noted. Today, more than 200 species have been seen, many nesting on the Audubon site.

The Rio Salado Audubon Center’s strategic location in the multicultural heart of the city will help reach deep into the community to educate a new nation of conservationists and support the growth of a conservation ethic. Opening its doors in an underserved Phoenix community, the Center strives to bring nature based educational experiences to a group who might not otherwise be given the opportunity. In concert with its outreach goals, the Audubon Center is committed to a sustainable, responsibly built environment. 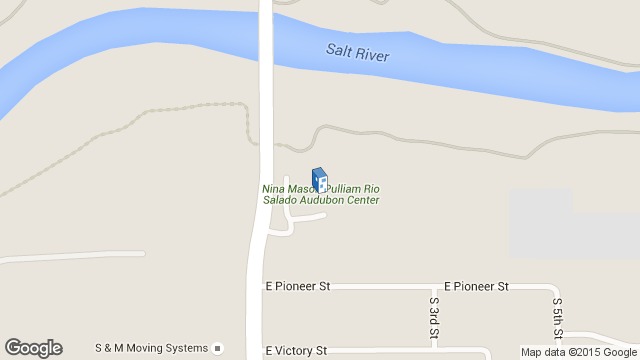 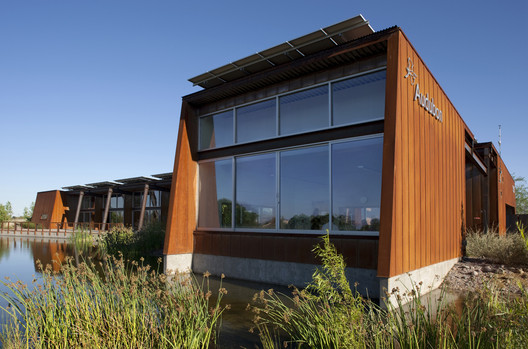