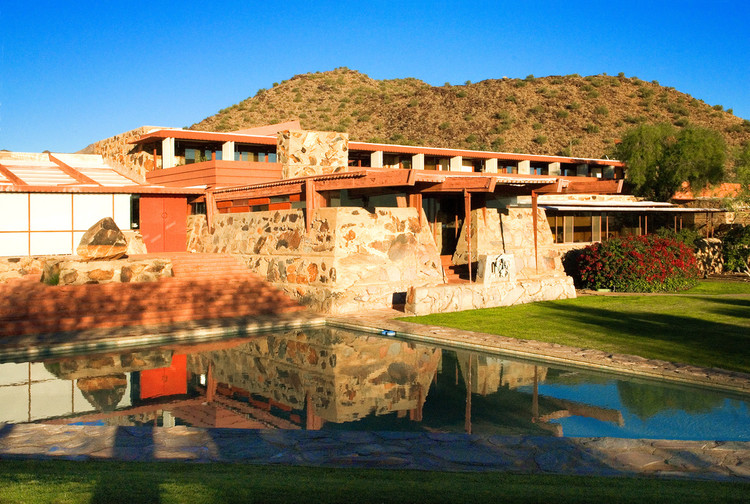 Text description provided by the architects. Situated in the Sonoran desert outside of Scottsdale, Arizona stands a living memorial and testament to the life and work of Frank Lloyd Wright. Completed between 1937 - 1959, Taliesin West was the winter home to Wright and his wife’s summer home, Taliesin, in Spring Green, Wisconsin in addition to being Wright’s workshop and school for his apprentices.

First conceptualized in 1927 to escape the harsh winters of the Midwest, Arizona’s arid desert climate proved to a place that could inspire Wright and his apprentices. Wright found that the atmosphere of Scottsdale’s Sonoran desert was a perfect place for a residence, a place of business, and most importantly a place to learn stating:

“Arizona needs its own architecture… Arizona’s long, low, sweeping lines, uptilting planes. Surface patterned after such abstraction in line and color as find “realism” in the patterns of the rattlesnake, the Gila monster, the chameleon, and the saguaro, cholla or staghorn – or is it the other way around—are inspiration enough.”

After four years of bringing his apprentices to Arizona during the harsh Wisconsin winters, Wright and his wife finally made the trek to Arizona to take up residence in the expansive landscape on the southern end of McDowell Range that overlooked Scottsdale’s Paradise Valley in 1937. At the time, Wright paid $3.50 an acre for what would become the Taliesin Fellowship and the Frank Lloyd Wright School of Architecture main campus.

Taliesin West is not only a symbol of Wright’s versatility and influential expansion throughout the United States, but it marks a moment in his career where context and vernacular begin to integrate into Wright’s formulated Prairie Style.

Similar to his other projects, Wright takes special interest in locally available materials and applies them in similar fashion to his other Prairie Style projects, employing low level, horizontal planes that keep the house and studio low to the ground to insure effective natural ventilation and protection and shade from the intense desert sun.

During the construction of Taliesin West, the house and studio were merely a series of “sleeping boxes” that were clustered around a central terrace for Wright and his apprentices.  When the main portion of the house and studio were completed by the apprentices, the different spaces of the house for Wright and his wife, the apprentices, and the gathering spaces were all organized to maintain a certain sense of privacy within, but a formal compositional balance with the landscape. Taliesin West is less of a singular building as it is a series of spaces that are connected through terraces, gardens, and pools.

Similar to all of Wrights projects, every aspect of design and detail of the project was given particular attention by Wright. Beside the close attention to the arid desert climate, Wright implemented local and site provided materials for the construction of the house and foundation.

One of the most significant uses of material and details of the house is Wright’s employment of the desert stone found on the site.  Through the use of redwood formwork, the flat faces of the stones were faced outwards and the space in between the stones were combined with  a concrete mix that make up the larger stone walls and structural elements of the house. Wright also used a natural redwood timber for the roofing structure and parts of the house and studio’s facade.

The rich red hue from the redwood timber along with the earthy, sandy hues from the concrete and the stone creates a close natural relationship between the house and landscape.

“Our new desert camp belongs to the Arizona desert as though it had stood there during creation.” – Wright

For Wright, Taliesin West was an ongoing project each winter that he would return to the house he would rethink previous designs and begin to rebuild parts of the house with his apprentices.  Wright later added a larger dining room, a music pavilion, and a cabaret theater, which has been recognized as one of Wright’s most accomplished spaces.

The cabaret theater functions as both a formal and informal space; transforming for the entertainment of guests, while also serving as a formal dining space for special guests.

Taliesin West was not only home to Wright and his apprentices, but it was the origin of some of Wright’s most famous projects including the Guggenheim Museum in New York City and the Grady Grammage Auditorium on Arizona State University’s campus in Tempe.

In 1982, Taliesin West was designated as a National Landmark and in 2008 it was nominated to become granted World Heritage status.

Today, Taliesin West continues to be the home to the Taliesin Fellowship as well as the main campus to the Frank Lloyd Wright School of Architecture where one can experience the presence and continuation of Wright’s architectural discourse in the house and the work of the apprentices.