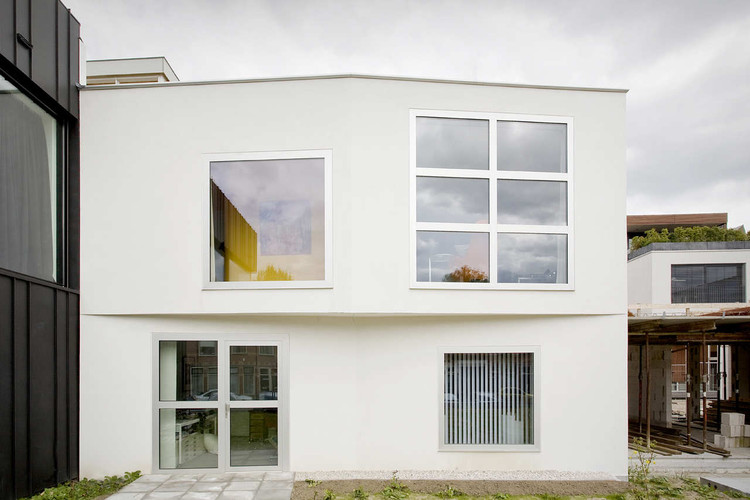 The site is a former industrial area near the city centre, designated by the city of Leiden as an experimental housing zone where people can develop their own homes. The local authorities supplied a schematic urban plan based on a grid, giving private persons a framework to fill in. It consists of more than a hundred plots in a pedestrian precinct. Regarding the appearance of the houses there are no limiting conditions other than a fixed maximum volume.

House NL III is part of an ensemble of nine houses which, in the shape of a horseshoe, are grouped around a communal garden. Each house is an autonomous object designed by a different architect. The houses are connected to each other by means of a party wall. House NL III is situated on plot 3, which has a surface area of 9 x 10 meter.

House NL III is an abstract, white stucco, solid object that virtually covers the available square base. It consists of two floors, of which each floor has a typical program and spatial lay-out.

Both floors are clearly distinguishable on the outside: the façade of the upper floor bents outwards in contrast to the façade of the ground floor which bents inwards, resulting in a slight overhang. This combination of indention and protrusion not only gives the house its special looks, it also shows that the house is, spatially and functionally, made up of two parts.

The lower part is designated as a working zone whereas the upper part functions as a small apartment. The spatial lay-out of both parts is different. At the upper part the several living spaces are directly linked up with each other. There are no passageways between the different spaces, which evokes a sense of openness and spaciousness. The diagonal vista that results from the absence of partitions in the middle of the floor plan makes the space look more spacious and it contributes to the open character. Furthermore, all partitions are detached from the exterior walls thus making it possible to walk all round the space. Whereas the upper floor is spatially dynamic, the ground floor is much more static; it is divided into simple rooms, suitable to work in seclusion.

Another special feature of this house is the use of color. At specific places, the transition between inside and outside is marked by an overall coloring of walls, ceiling and floor in a warm yellow color. In this way interior and exterior are connected delicately.

House NL III is a special house in the sense that it is almost completely built by the owner-occupier himself; he made his home with his own hands. In this way the owner-occupier not only managed to realize a home at cost price, he also got personally engaged in the process of building architecture. As a professional instrument maker of clavichords he accomplished his mission with a lot of skill, patience and devotion. The result is a low price custom-made house that derives its architectural beauty from simplicity. In this way House NL III is not only an architectural but also an economic confirmation of the famous proverb “less is more”….