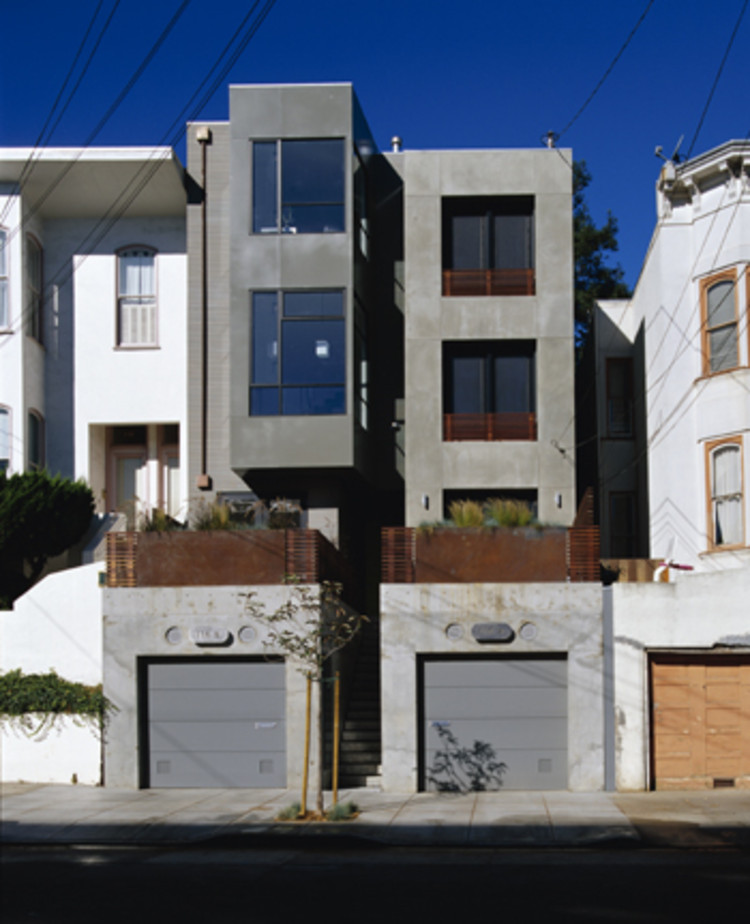 Text description provided by the architects. This project is a modern, urban two-unit townhouse designed by Zack | de Vito. Its construction consists of a 3-story wood frame structure over a concrete basement/garage. The site is a typical San Francisco lot, 26' x 115', with a moderate to steep upslope. The project was undertaken as a design build project with the Architect also being the owner and the general contractor. The North unit is the owner/architect’s home, and the South unit was sold. The design/build/develop strategy allowed the owners to build a new, modern home in the almost inaccessibly expensive Bay area housing market. The design build strategy also allowed an extraordianry amount of design freedom during construction, with details being worked out continuously through construction.

Project description, images and drawings after the break.

The program was for two townhouses consisting of side-by-side units, three floors over a basement/garage. Each unit has a two car, tandem garage and a mechanical/storage room. Unit A is +/- 2,530 sqf, 3 bedrooms, 2 1/2 baths, a family room and an entry/den, and an open plan Kitchen/Living/Dining Room, which opens out to a terraced rear yard. Unit B is 1,800 sqf, and has 3 bedrooms, 3 baths and a full floor, open plan Kitchen/Living/Dining Room. Both units also have a front deck over the garage. Each unit has a dramatic, central stair connecting all of the levels.

There were three primary goals for the project: First, to design an obviously modern building, but one that was also sensitive to the predominantly Victorian character of the neighborhood. Second, the intent was to design two units that had equal access to the natural amenities of the site - light, air and views, as well has to have a clear, diagrammatically simple plan, but be spatially dynamic. Third, as a design/build project, the goal was to take advantage of the extra-ordinary control this process allows, and be expressive in the use of materials, detail and craft.

While being clearly modern, the building has similar scale, massing and materials as its 100-year-old neighbors. Its form is clearly of its time, but it also uses time-honored elements such as a bay window and the front garages with decks above. Materials are also familiar, but used in a more contemporary, expressive manor.

The most distinctive characteristic of the project though is its plan and spatial configuration. To allow side by side townhouses, a center dividing wall, angled from front to back, creates trapezoidal spaces, one end wide, one narrow. The program was then adapted to best use the large and small ends of the space where appropriate. The space is then divided in plan by a dramatic central stair, which allowed for changes in section, with some rooms taller than others. The dynamic plan and section create lively, clearly organized and interesting spaces.

The center stair epitomizes the attention to craft and detail. It is fabricated from water jet cut steel plate and precision cut, sanded acrylic. It is a collection of pre-fabricated parts, assembled on site by our own crew of craftsmen. It is structurally daring and the translucent steps and minimal structure flood all four levels with light. The fabrication techniques take advantage of new technologies, while still allowing for the craft of the worker to be expressed. 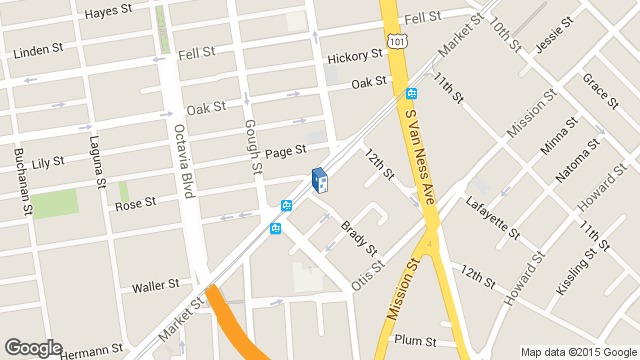