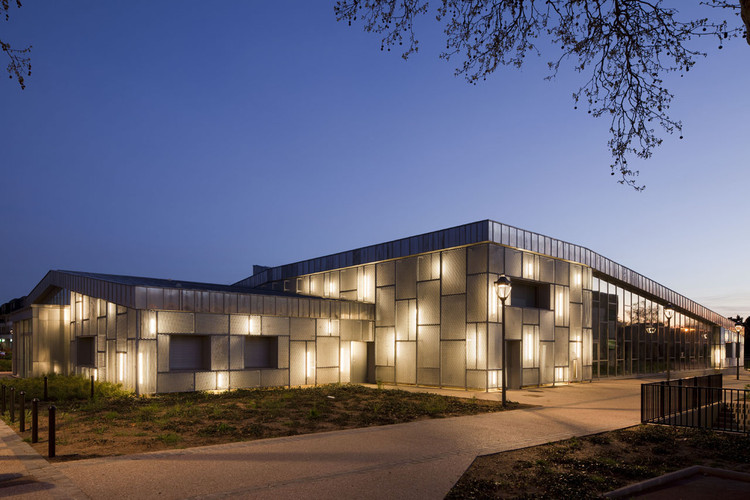 Text description provided by the architects. The Media Library and Cultural centre is located in the town of Lisses, 30 kilometers to the south of Paris, in a zone developed during the period of suburban expansion undertaken in the 1970s around the French capital, an urban extension consisting of social and sports facilities, shops, housing and parking organized along a pedestrian path, the Mail de l’Ile de France. The new project was intended to replace an existing cultural and administrative centre on the same site, a building severely damaged from years of repeated acts of vandalism.

The project’s built anatomy is the result of a series of “forces” generated from its physical, political, social and technical context, and which in turn engender its spatial and built order, its materiality, and its position relative to the immediate context. Its program embodies the politico-cultural decision to house two independent and complementary entities within the same structure, the Colette Library (run by the Communauté d’agglomération d’Evry centre Essonne) and the Jean Cocteau Cultural centre (managed by Lisses), both of which would share the use of an 80-seat auditorium.

In order to accommodate the program, the proposed building’s irregular trapezoidal footprint extends to the physical limits of the site, a perimeter which is itself the result of successive modifications to the property limits. A series of functional constraints help to structure the building’s spatial order: spaces of enclosure (auditorium, offices, meeting rooms, toilets) are positioned as a series of clearly identifiable “masses” within the building envelope, which in turn generate a network of linked and fluid interstitial “cavities” containing the principal public spaces (reading rooms and consultation spaces, circulation, and exposition spaces), further unified by a continuous poured resin floor surface and a perforated plasterboard ceiling.

Light enters these cavities laterally through large-scale glazed transparent wall surfaces from the north and east, and from the south through a system of silkscreen patterned glazing. Light also enters them through a network of irregular roof openings capped with polycarbonate panels which “irrigate” the reading rooms and consultation spaces with subtle, continuously changing light conditions, not unlike that of a prairie beneath a partly cloudy sky. Natural light enters the enclosed “masses” through smaller, punched openings in their lateral walls. The building’s hybrid structural system directly from the duality of its spatial order, consisting of reinforced concrete bearing walls and a steel roof framing armature.

The library and cultural centre are joined beneath a continuous, folded zinc roof surface. These inclined folds link the various functional heights of the enclosed built masses, producing rich spatial opportunities for the resulting interior spaces.

The nature of the exterior envelope is a direct consequence of the social reality of the site. In order to impede the regular acts of vandalism (graffiti, burning and other degradation), the building is clad in a skin of perforated, galvanized and backlit steel mesh panels placed at a distance of 40cm from its exterior concrete structural walls. The ambiguous nature of this mottled, non-continuous surface allows one to perceive the materiality of the envelope in numerous ways depending upon the quality of light, one’s orientation, the season: transparent, opaque, scintillating…etc. Shatter-resistant glass, reinforced exterior steel doors and shutters complete the system of exterior protection. 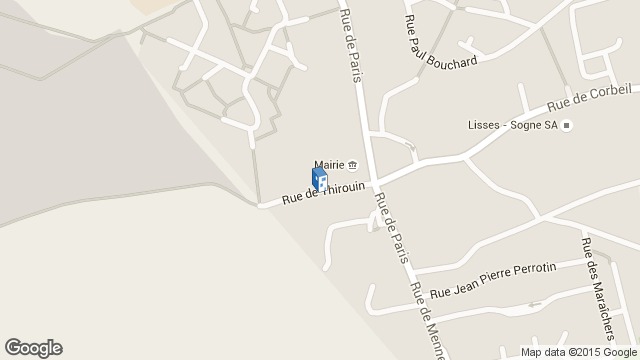