The awkwardly shaped large site at West Side Highway and 57th Street is about to get a whole lot more attention. Bjarke Ingels and BIG will finally make their architectural debut in North America, with an unusual apartment building design in none other than New York City. The asymmetrical peak almost pyramid in shape is the result of blending the mismatched forms of a typical Manhattan tower podium and a low-rise apartment block European in style.

BIG’s reinvention of the ‘New York apartment building’ somehow is able to check all of the boxes, providing a connection to the waterfront and the Hudson River Park, acknowledging the surrounding context both in relationship to building size and neighbors’ views, and alleviating traffic noise. The leafy green courtyards that pop up within this new residential typology help to balance a steeply sloped facade, 450-feet at its peak. Designed for client Durst Fetner Residential, the building offers both a cultural and commercial program and will accommodate 600 residential units varying in size.

Follow the break for the architect’s description and more photographs. 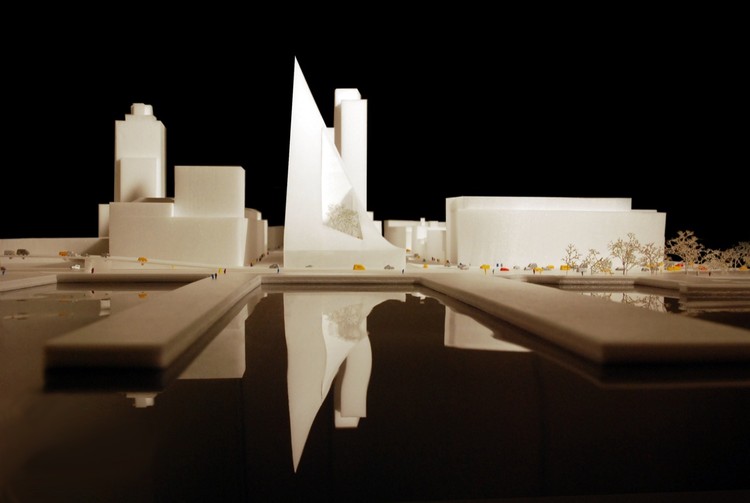 BIG has taken a step back to survey the rules of the system in Manhattan and is introducing a European typology: the perimeter block. With an efficient layout and a sense of intimacy, the perimeter block meets demands for density and security. In this project, we have married it to the traditional Manhattan high-rise, creating a unique shape which combines the advantages of both: the compactness of a courtyard  with the airiness and the amazing views of a skyscraper. The form of the building shifts depending on the viewer’s vantage point. From the West Side Highway, it appears to be a pyramid; from West 58th, a dramatic glass spire.

By keeping three corners of the block low and lifting the north-east portion of the building, the courtyard opens views towards the Hudson River and brings the low western sun deep into the block. While the courtyard is a private space for residents, it can still be seen from the outside, creating a visual connection to the greenery of the Hudson River Park. The slope of the building allows for a transition in scale between the low-rise structures to the south and the high-rise residential towers to the north and west of the site.

The eye-catching and highly visible roof consists of a simple ruled surface perforated with terraces—each one unique and south-facing. Its closed appearance is in contrast with the building’s perimeter.

The building is predominantly residential units of different sizes with cultural and commercial program at the street level and the second floor. By slightly angling the interior walls, all units are oriented towards the Hudson River and the sun. The fishbone pattern of the walls can also be found in the elevation. Every apartment has a bay window to take advantage of the site’s spectacular views. In addition, the balconies encourage interaction between the residents and the passers-by.