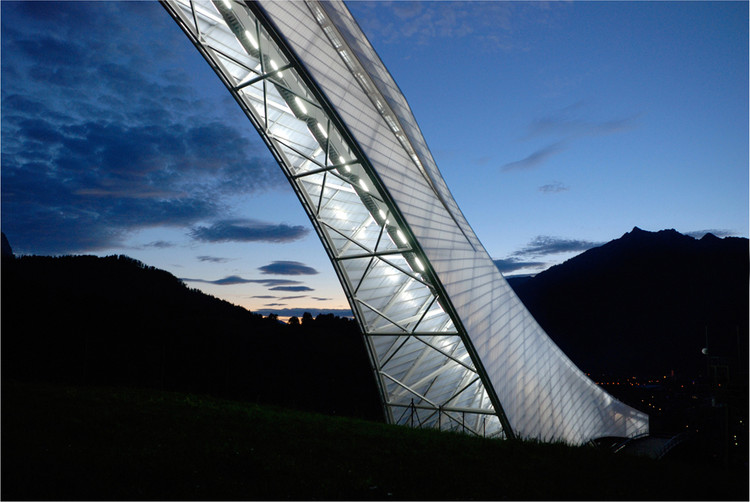 The Olympic Ski Jump in Garmisch-Partenkirchen is one of the most renowned facilities of its kind, having hosted the New Year ski jumping competition as part of the international Four Hills Tournament for 55 years. Now, after the advance premiere in January 2008, the new Olympic ski-jumping sports facility, designed by the young Munich ofce of Prof. Klaus Loenhart and Christoph Mayr, terrain: loenhart&mayr architects and landscape architects, will be ofcially opened in December of this year.

Due to a required upgrade of the jump to the advanced technical standards of the International Skiing Federation (FIS), the construction of an entirely new ski jump was inevitable. Among projects by Zaha Hadid Architects, Behnisch Architects and others, an international architectural competition in autumn 2006 led to the decision to erect a cantilevering structure as the new landmark of ski sports in the valley of Garmisch-Partenkirchen. In the course of designing the ski jump, the terrain:loenhart&mayr ofce drew inspiration from the local topography of mount Gudiberg.

The connecting lines of the new ski-jumping facility are an interpretation of the gentle curved lines of the outposts of the chain of mountains. Through its integrative and linear aesthetics of undulating lines, the new design of the jump ties in separate functional entities, including delivery and access points, to form a dynamic landscape-building unit. As much the goal was to develop a topographically rooted architecture for the new Olympic skijumping hill, it is meant to work in a dialectical mode: Topographic integration links up with sculptural expressiveness, giving the new jump in Garmisch-Partenkirchen its unique characteristic appearance. At the same time, its architectural impression and formal dynamics also invites associations with the risk and acceleration of the ski-jumping sport.

The quest to overcome gravitation, inherently linked with ski jumping, is architecturally expressed by the cantilevering inrun of the ski jump. In the more than 100-metre-long inrun structure, athletes, coaches, press representatives, and visitors can walk up the 332 steps of the "Jacob's ladder" to arrive at the three competition decks.

Alternatively, and less strenuously, the decks can also be accessed with the newly developed diagonal elevator. Athletes have nicknamed the new facility the "Olympic Cantilever". The design of the inrun track is also a novelty. The jump is virtually independent of the weather in winter due to its minimal snow volume requirement and energy demand. Thanks to the additional thermoplastic track, the jump can be used in summer without having to be converted.

The entire inrun structure is covered with translucent polycarbonate elements whose appearance changes with the daylight and respective lighting. During the day, the new jump forms a harmonious unity with the surrounding snowcovered landscape. Light and shadow on the white panels establish a suggestive relationship with the surrounding winter landscape. After sunset, the artifcial light illuminates the architectural body from inside, turning the cantilevering building into an illuminated sculpture that is visible even at great distance in the valley of Garmisch-Partenkirchen. 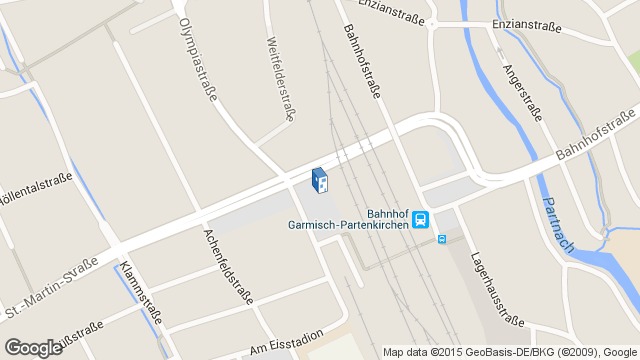