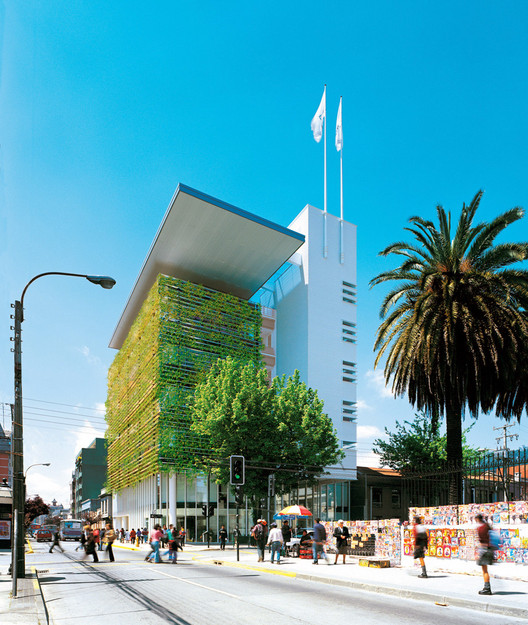 Text description provided by the architects. The rainy city of Concepción, is located in the mouth of the Bío-Bío River, 520 Km south of Santiago. It has aprox. 220.000 inhabitants, but its threshold spans reaches some 630.000 people. The highlights of its economy are the elaboration of steel and the wood industry, both on wide exporting booms. We were asked to design a branch of the ‘Consorcio Nacional de Seguros', National Insurance Consortium, in a corner site, in front of the only historic and antique church in Concepción, whose façade had been unfortunately reconstructed after an earthquake. Furthermore, it had a front fenced square that impoverished its quality and public character.

A first version was carried out. It consisted in a triangular building with the vertical circulation organized in a glazed tower in the south. Because the triangular building spun the first two floors in a double height space, a square was created, which joined to the church's square, creating an environment of urban interest. In turn, the double point of the corner cantilever emphasized the building presence from the busy San Martin Street. The building was clad in copper. The glazed sectors had a ‘double skin' with climbing plants on the North and West sides. This solution was eliminated for being expensive.

A simpler and more rectangular proposal was developed. The building also withdraws on the west to visually enlarge the square, which passes by the street, joining the old church to the new building. A interesting public space would be added to Concepción.

The building is composed basically by three elements:

a) A free plant "volume" that looks to the East, North and West, protected from the sun by laminated wood sections that support a "double green skin" with mature climbing plants. The wood use alludes to the regional production;

b) A "plan-volume" vertical to the South that flies over the square. Improves the energetic conservation of the building. It is clad in undulated metal plates, a material very utilized in the South of Chile in an economic version. Reminds as well the production of regional steel. Its tall and large windows allow views towards the hills of Concepción, but block the sight of the haphazard roofs of the city and;

c) A great "horizontal" cantilever roof that serves as an end of the building and protects the large balcony of the upper floor from the western sun wich has the view to the Bío-Bío river. In turn, emphatizes the relation with the small squate. These three bodies give the impression of detachment between them and are supported over a glazing membrane in the first two access and customer service levels. More ever, the main entrance is on axis to the church, on the other side of the square. 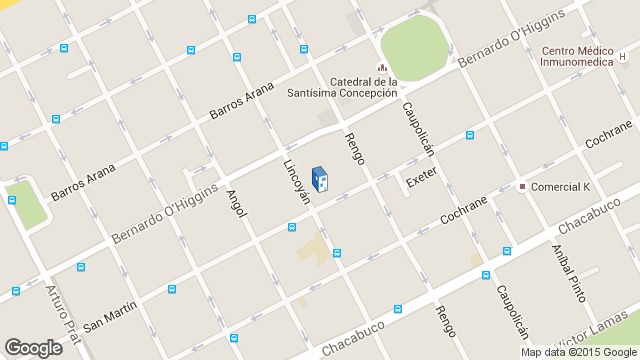