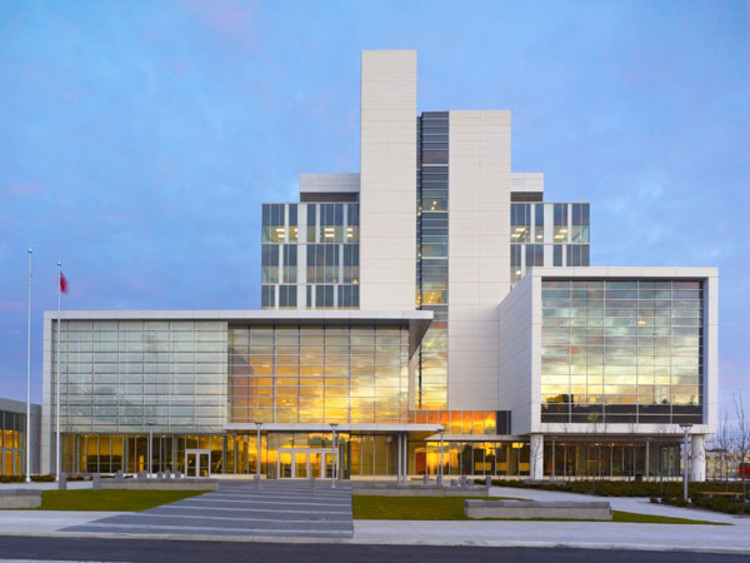 Text description provided by the architects. With its richly patterned cladding of spandrel, clear glass and carefully scaled massing, the Durham Consolidated Courthouse, completed in January 2010, makes a significant contribution to the emerging urban framework of downtown Oshawa. Its bold, modern vocabulary emphasizes transparency and openness both for users and passersby.

Follow the break for sketches, drawings, and more photographs of the Durham Consolidated Courthouse.

A large outdoor public space, Courthouse Square, is the forecourt to the building entrance. The scale of the main entrance pavilion on the square establishes a sense of dignity, appropriate for the front door of a courthouse.  Providing badly needed space for the Province´s judicial system, this six-story, 40,000 sqm structure houses 33 courtrooms, associated support space and prisoner-holding facilities. For planning efficiency, high-volume functions are located at or close to grade. The public circulation system is highly legible for first time users.

Exhibiting a new typology for a typical courtroom floor, the design has a “back to back” arrangement of courtrooms that results in short walking distances for judges and staff. For participants in court proceedings, the availability of natural light and outdoor views in the courtroom waiting areas will provide some stress relief.

The courthouse represents a physical embodiment of our justice system interpreted in a modernist language. Solid building elements serve to express the stability and permanence of the courts. Welcoming to the public, the courthouse elevations are highly transparent, using clear glass with a rich mosaic of white ceramic frit glass panels. The scale of the main entrance pavilion creates a formality and sense of dignity, appropriate for the front door of a courthouse.

The project is the first LEED NC Gold Provincial Government Building to be completed. It has a compact plan that minimizes the exterior envelope, contributing to an overall building energy consumption that is 42% less than the Model National Energy Code for Buildings (MNECB).

The courthouse is setback from Carriage Works Road to create a Courthouse Square of significant size that acts as a formal forecourt for the building. Providing over one acre of new landscaped open space, the project gives the City a significant new public amenity. The single public building entry is centrally located on the Square. The building mass parallels the street grid. Building setbacks serve to mediate between the surrounding properties and the large mass of the proposed building: a continuous 10m high street wall creates a strong urban edge and pedestrian scale along Bond Street compatible with the existing adjacent low structures; above the second floor the building steps back. On the west, the main building core is raised to create a visual terminus, looking east from the proposed linear park. At the southeast corner of the site, a column of glass that is illuminated at night creates a strong gateway to downtown Oshawa.

The Durham Consolidated Courthouse’s location and siting establish its significance as a major civic building within an urban community. The site, 3.9 acres in size in downtown Oshawa, is bounded by Bond Street on the south, Carriage Works Drive on the west, and Division Street on the east. A surface parking lot has been built to the north. A new development that includes a linear pedestrian park is planned to the west. To the south and east there are two and three storey structures.

The project exhibits a new typology for a typical courtroom floor that has a “back to back” arrangement of courtrooms that results in short walking distances for judges and staff. The availability of daylight and views to the outside in the courtroom waiting areas will reduce stress for the participants in court proceedings. 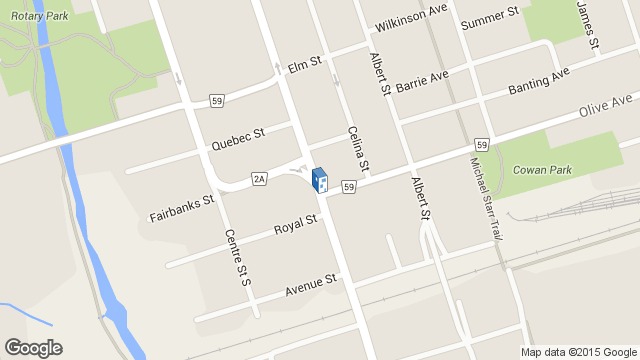