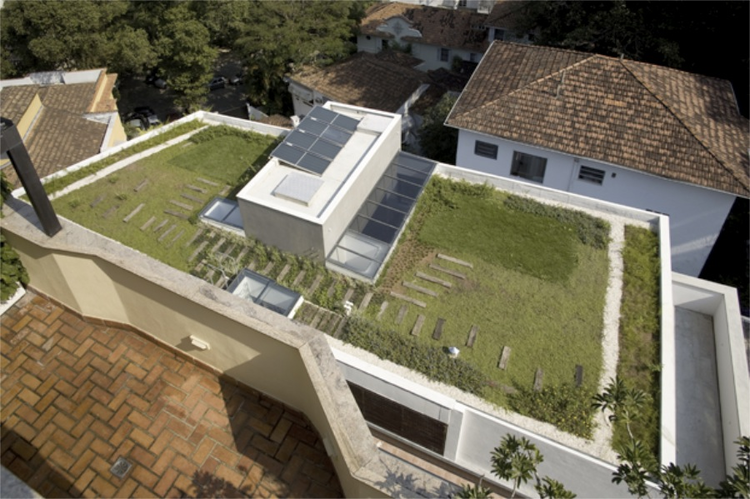 Text description provided by the architects. Two basic principles guided our project for the construction of a new penthouse foor to house a single 234-square-meter apartment, located at the base of the Corcovado Mountain in Rio de Janeiro's forested Jardim Botânico neighborhood.

The first was a demand for an open space with the least possible amount of internal subdivisions, with the intent to provide good cross ventilation and establish continuity between the interior areas and the surrounding landscape, particularly the Atlantic Rainforest located right in front of the four-story building. Our solution was to group together personal and service areas (bedroom, bathrooms, laundry room) in one block that runs along the east façade, thus creating an open space for the rest of the apartment that connects the front terrace all the way to the back terrace. The open space accommodates the kitchen, dining room, living room, entrance stairs, and study.

Such layout gave the interior space a more longitudinal reading. As a counterpoint, a geometrical volume holding the building's large water tank was inserted across the width of the ceiling. The added volume is visually emphasized by its lower ceiling height and different surface treatment. It is further detached through a skylight, which makes the entire continuity of the volume visible from the inside.

At the north end, which holds the living and dining rooms, a system of pivoting doors placed across the entire 8.80-meter width of the apartment allow for complete opening of the space, promoting direct contact with the Tijuca Forest and the remarkable statue of Christ the Redeemer at its mountaintop.

The second principle was to use renewable resources wherever possible. The building's old asbestos roof was replaced with a green roof, which reduces both the thermal effect of the sun's radiation into the apartment and its refection back into the atmosphere. This solution, allied with the allowance of cross ventilation, eliminated the need for air conditioning in the penthouse apartment.

In addition to its heat and noise reduction benefits, the green roof can be accessed directly from inside the apartment and serves as a garden to be enjoyed by its residents, including the possibility to grow a vegetable garden and an area to create compost from organic waste.

Solar panels were installed at the highest point of the building for water heating. The abundant natural lighting provided by the large window openings in all four façades was intensified by the addition of skylights. These skylights were designed with a system that permits constant air circulation and keeps the environment comfortable.

A deactivated cistern in the building's underground floor was repaired to store rainwater collected from the roof, which can be reused both for watering the plants and cleaning the external areas of the building.

The formal solution adopted meets the requirements imposed by the public authorities regarding the insertion of a new volume on an existing building, particularly since it is located in an officially protected area of cultural property (Jardim Botânico's APAC - Área de Proteção do Ambiente Cultural).

The ‘Magui Building' was constructed in 1951, a time of urban occupation in the neighborhood and a period of great significance to the development of the Modern Movement in Rio de Janeiro's urban architecture. It was during that same period and in those vicinities that great works were produced, including the Antônio Ceppas buildings (1952) by Jorge Machado Moreira and the Lagoa Hospital (former Sul América Hospital, 1952) by Oscar Niemeyer and Hélio Uchoa, with its landscape designed by Burle Marx.

Although the building's original design does not strictly follow Le Corbusier's urban precepts, it presents a geometric composition that is very much in line with the modern architecture produced at the time.

This new intervention is based on the idea of inserting new elements with similar geometric characteristics as the existing ones. Because the new volume is withdrawn 5 meters from the building's main façade, the frontal view of the building has been unaffected. As for the sides of the building, the new project was designed to follow the lines of the original composition. 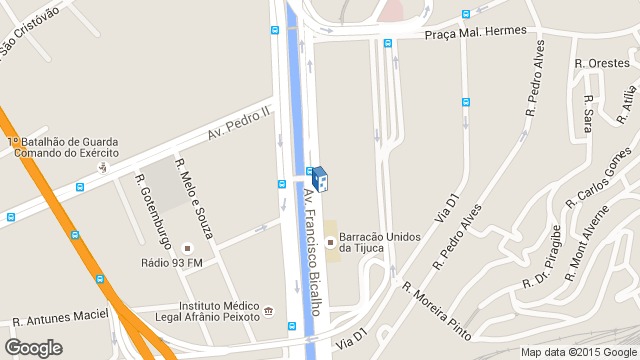