The team of architects Maryam Fazel and Belinda Ercan, from Iran and Germany, respectively, have won first prize in the competition for the design of the Moscow Circus School launched by the Architectural Competition Concours d’Architecture (AC-CA).

The winning proposal, entitled Elytra, is an “eye-catching, cutting-edge, [and] unconventional” design that will tower over Moscow’s Tverskoy District, an area which features a burgeoning artistic scene.

Inspired by the forewings of insects—called elytra—the project opens upwards as a protective shell, and will feature both public and private space.

A team comprised of Chinese architects Hang Guo and Shanshan Li have used the history of theatre and circus to drive their proposal for a new Moscow Circus School. The design, dubbed Dome and Circus, was developed for the recent Architectural Competition Concours d'Architecture (AC-CA) competition, which encouraged participants to consider the ways in which their design could generate discussion about the relationship between architecture and culture.

Hosted by [AC-CA], the results were recently announced for their New Contemporary Art Museum competition. With the aim of a design for a new art museum in the heart of the city, Shelby Ponce & Eduardo Ponce took the first place award, which successfully engages and establishes a cultural dialogue with the urban fabric surrounding it. As the capital of Argentina and located on the western shore of the estuary of the Río de la Plata, the city is an important economic center. Its architecture is a combination of different styles which gives it a unique architectural beauty. More images and information on the winning proposals after the break.

[AC-CA] just launched their next competition which aims at designing a New Sustainable Market Square in Casablanca, Morocco. A market square is a public open area where market stalls are traditionally set out for trading, commonly on particular days. It is usually situated in the center of the town, surrounded by buildings and streets. To create a sustainable market, environmentally conscious design techniques will be implemented. The architecture of this new structure should reflect contemporary design tendencies. The proposal must not only attend to the specific function but the design should also take into consideration the urban insertion and its impact. Early bird registration ends July 31 with the submission deadline November 5. To register and for more information, please visit here.

The [AC-CA]’s recent call for proposals for a new Contemporary Art Museum in the heart of Buenos Aires has been seductively synthesized by Houston architect Michael Arellanes II, principal and founder of M A 2 Architectural Design. The nature of the competition called for a building that reflects contemporary design tendencies, whilst simultaneously attending to the specific functions that are required of art museums and considering the impact upon the local milieu. Located within the Puerto Madero district, the museum will occupy a substantial plot of land along the riverbank of the Río de la Plata. While there are no plans for the Contemporary Art Museum to be built, the goal to generate progressive modern design ideas and dialogue surely succeeds with submissions of MA2’s caliber. More details and Arellanes’s description after the break. 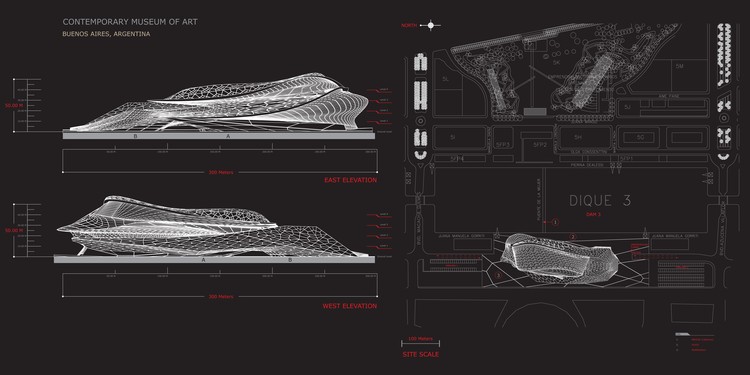 [AC-CA] recently announced their competition, New Contemporary Art Museum, with the aim of a design for a new art museum in the heart of the city. As the capital of Argentina and located on the western shore of the estuary of the Río de la Plata, the city is an important economic center. Its architecture is a combination of different styles which gives it a unique architectural beauty. The deadline for submissions is July 5th. More information on the competition after the break.