A team comprised of Chinese architects Hang Guo and Shanshan Li have used the history of theatre and circus to drive their proposal for a new Moscow Circus School. The design, dubbed Dome and Circus, was developed for the recent Architectural Competition Concours d'Architecture (AC-CA) competition, which encouraged participants to consider the ways in which their design could generate discussion about the relationship between architecture and culture.

Dome and Circus respond to this criteria by reinterpreting ancient theatrical spaces, such as the Pantheon or ancient Greek outdoor theatres, into a contemporary cultural arena. The "theme and prototype" of the project became the dome, and it is deployed across the project in "multiple and continuous" ways.

By interlacing the once separate domes, a sequence of spaces was created with blurred boundaries to one another. Above the domes lies a space described by the competition team as resembling "undulating waves," accommodating a vibrant mix of public program.

The roof plane is based upon the continuous Greek outdoor theatre and references the Moscow Hermitage Garden, a popular cultural destination nearby. The spaces between each of the demarcated programmatic zones are filled "rhythmically" with spheres, which have the dual function of public space and structure.

The architects said in their design statement: When the sun goes down, the light projects shadow through the hole of the roof, indicating the coming of night. The hustle and bustle began to play at the circus. This is the miracle show time of the Moscow Circus School.

Dome and Circus was awarded an honorable mention. For more information, including all of the published award winners, head over to the competition website. 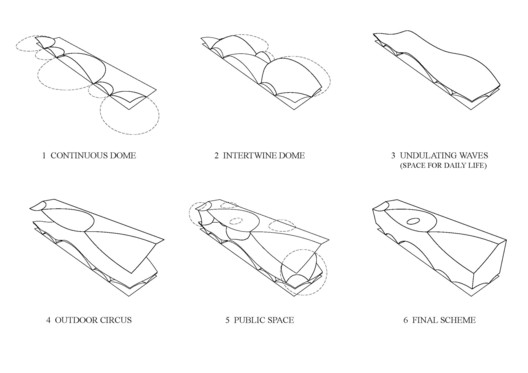