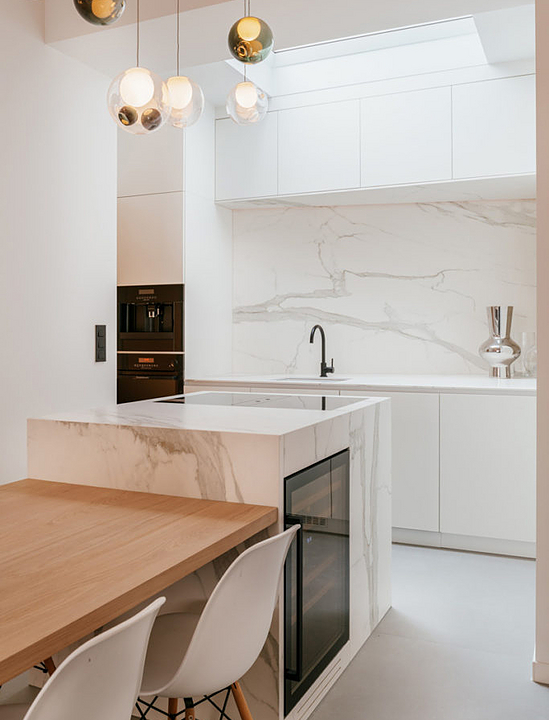 Neolith Sintered stone was used extensively in this City House refurbishment in Brussels; the property was purchased by a for its location in a lively Brussels neighborhood. To Maximize the space and give the appearance of spaciousness, imaginative design had to be employed for the 180m2 City House.

The refurbished house is clad throughout with Neolith Sintered Stone, every room featuring different colors and finishes. The couple's traditional minimalist ideas were realized but with diversity in each room and contemporary materials despite the project being a traditional build.

The interior designer, Michel Penneman, enjoyed the challenge of the small house refurbishment which called for ingenuity. He opened up the spaces by tearing down some walls to create longer perspectives. The result was an increase in the sense of space and light without damaging the integrity of the frame.

The design was enabled by communicating early on with an engineer to remove the walls. Once the spaces were defined, a brief for use of the areas was made and colors were chosen for each area. For areas of the house where people live and relax, clean neutral colors were selected. Bolder, brighter finishes were brought in as furniture or decorations which can be changed as needed. A palette of white, grey and black was chosen to provide a serene backdrop.

The City House successfully explores the range of possibilities of Neolith in a whole house, transformed from a collection of confined spaces to an open, contemporary home.

Neolith
✕
Thank you for your interest in this product! Maybe you'd like to request a quote for these similar products?
Get a Quote