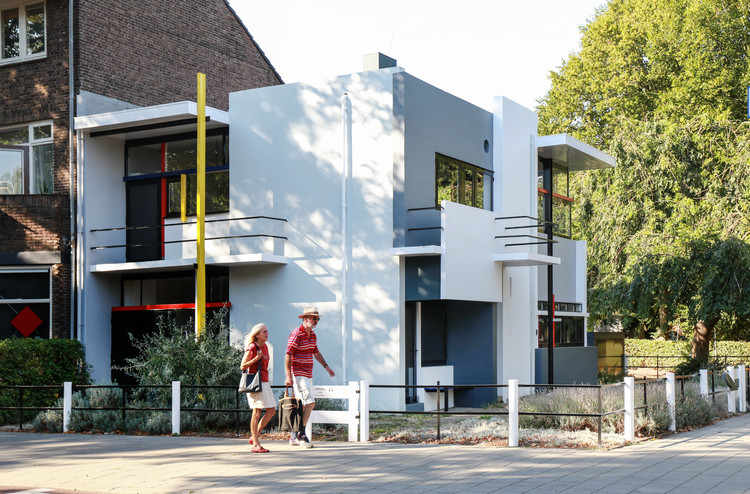 Text description provided by the architects. Still as visionary and eccentric as it was when it was built in the 1920s, the Schroder House by Gerrit Rietveld continues to impress architects and interior designers with its innovative solutions to prominent design questions of its time.

The flexibility of the interior spaces and the obviously planar quality of the house both give it an edge that makes it distinguishable and unique on every level.

The Schroder House is the only building that was designed in complete accordance with the De Stijl style,  which was marked by primary colors and pure ideas.

Founded in 1917, the movement was named after a periodical that became the most influential voice for the ideals of modern art and architecture in the Netherlands; other famous people of the movement include Piet Mondrian and J.J.P. Oud. The group of artists and architects “sought for the universal, as the individual was losing its significance... abstraction, precision, geometry, striving towards artistic purity and austerity.”

Upon the death of Mr. Schroder Schrader, his wife felt the need to move into a smaller house with their three kids, where she would live until her death in 1985. The two-story house contains a transformable kitchen/dining/living area, studio space and reading room on the bottom, and the second floor contained bedrooms and storage space, only separated by portable partitions.

The flexibility of space meant that there was no hierarchical arrangement of rooms in the floor plan. The collapsable walls upstairs positioned around a central staircase were designed to provide the children with an option of pushing the partitions in during the day for an open play space and closing them at night for private bedrooms.

The three criteria given by Mrs. Schroder about the rooms for her kids stated that a bed should be able to fit in two different positions, each room should have access to the water supply and drainage, and all should have a door to access the outdoors directly.

This kind of detail was well planned by Rietveld and was prominent in other areas of the design, like specific paint colors to distinguish different spaces or functions. An interesting example of this is the front door, where black paint is used because Rietveld anticipated it would be accessed the most and would therefore be easily soiled.

Initially considered the outskirts of Utrecht, the lot on which the house is built opened up to only a few views worth framing. It is obvious that the architect had previous experience making furniture, especially when noticing the detail and functionality of the window screen, portable partitions, and table made for the children.

What makes the Schroder House an icon of the Modern Movement is its radical approach to design, the use of space, and the purity of its concepts and ideas as represented in the De Stijl movement. Its transformational quality of evenly matched spaces composed of independent planes perfectly met the goals of the De Stijl movement.

“As with his early chairs, Rietveld gave a new spatial meaning to the straight lines and rectangular planes of the various architectural structural elements, slabs, posts and beams, which were composed in a balanced ensemble.”

The main structure of the house is of reinforced concrete slabs and steel profiles. Walls are made of brick and plaster; window frames, doors, and floors were made from wood. To preserve the strict design standards about intersecting planes, the windows are hinged so that they are only able to open 90 degrees to the wall.