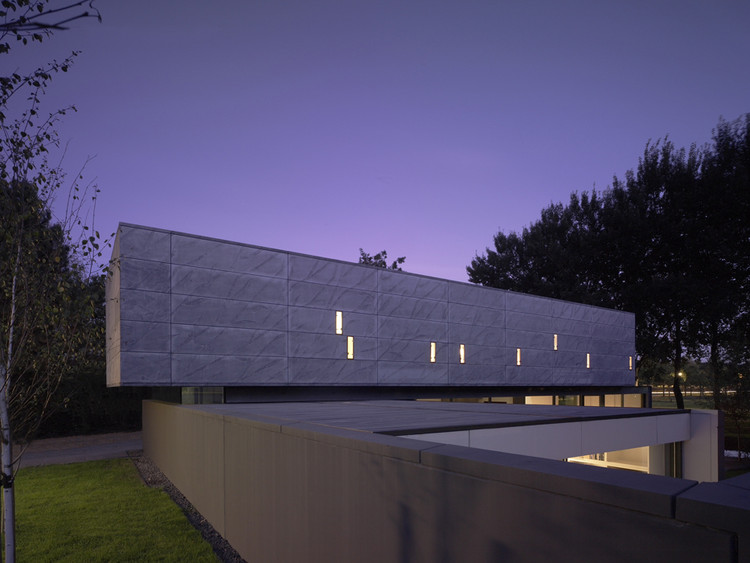 Text description provided by the architects. Behind the somewhat mysterious name ‘Project X', hides the design of René van Zuuk and his family's own residence. The villa with a small office space is located right next to the architect's former residence Psyche in Almere's The Fantasy district, an area for experimental housing. Because the old house serves as his architect's office since 2004, it occurred that the two plots could be consolidated into one garden. The garden area is optimized by leaving only the width of a parking space between Project X and its neighbouring house.

From an urban point of view three major considerations were important: the box-shaped appearance of all the Fantasy dwellings, the fixed building line and the pattern of alternating building heights. Placing the lower storey half below ground level resulted in House X being lower than the adjacent dwellings, thus fitting in the height sequence. The distance from the living room to the water is reduced to half a metre, creating a sense of living along the waterfront despite the rather modest size of the canal. This feeling is being intensified by the large expanse of glass in the living room offering a panoramic view on the canal.

Only the exceptionally high entrance door infringes the closed appearance of the box-shaped upper storey enclosing the bedrooms. Its façade is cladded with large thin cement tiles with a continuing branch-like pattern of grooves softening and reviving the rigid box shape. The scanting daylight entering the bedrooms comes through rooflights and a few subtle ‘eyelets' in the façade. Because of the small dimensions of the façade openings the main volume remains intact. The upper volume is separated from the lower storey by means of a glass strip. On the garden side the strip is storey high.

The basic design is largely defined by the latitude enabled by the Dutch Building Decree. The maximum volume allowed on the particular location is 500 m³, while the residence plus office required 750 m³. Nowadays the Building Decree creates the opportunity to build up to 2.5 metres outside an external wall, without submitting a planning application under the condition that it does not border a public street or public park. Therefore the building part perpendicular to the street is maximized in length to create as much extra building volume as possible. According to another provision in the Decree the extension can only start one meter from the front façade. To provide the ground-floor level with a uniform width, the upper floor protrudes one meter in the direction of the street. For the office section the rule that allows an annexe up to thirty square metres without a planning permission is utilized. This extra part is constructed as a basement to make it secondary to the living area, despite its street side location. To emphasize its commercial and subordinate character the exterior concrete surface is left exposed.

Inventive interpretation of these loopholes in the legislation has resulted not just in the space required, but also in unprecedented restrained and rich architecture.