Save
Brick House / State of Kin 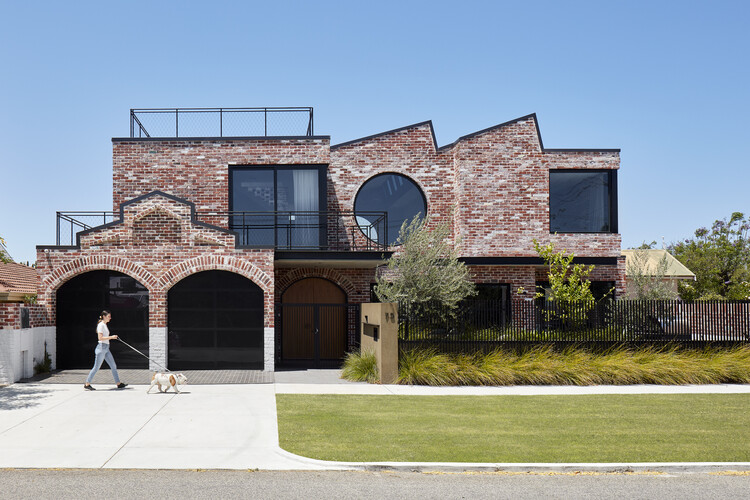 Text description provided by the architects. Subtly referencing the history of the area and surrounding urban fabric, we approached the small inner-city site with intention of maximizing living spaces within the tight perimeter and creating the illusion of a renovated heritage factory despite it being a new build. The home is constructed from red bricks that were sourced from character homes in the neighborhood that had been demolished. The reuse and celebration of this locally sourced material was a cornerstone of the design approach.

Saw-toothed roof forms of old factories in the area were a heavy influence, and we utilized traditional bricklaying and construction methods throughout the home, applying them to contemporary shapes. More traditional forms like arches are referenced but exaggerated, and lines are clean so that the profile is sharp against the texture of the brick.

Fully taking advantage of the property’s north-facing perspective, huge double-glazed circular windows allow spectacular light to infiltrate within while ensuring thermal efficiency and opening the façade of the home on both aspects. Capturing an abundance of natural light not only creates the sensation of lots of space despite the smaller footprint (without overdeveloping), but it also provides connectivity throughout the home.

Clean lines in the kitchen follow through to the alfresco, which also features a tilt door that is actually a garage door model customized to suit the couple’s purpose. Arches are layered as somewhat traditional forms but with the scale exaggerated to keep them fresh; bricks feature in a herringbone pattern on the ceiling of the cellar while black lines of steel and cabinetry are clean and sharp against the texture of the brick.

This proclamation of respect for the medium culminates in a feeling of nostalgia and familiarity bounded by modernity and sophistication. Whilst the aesthetic is undeniably very industrial and raw, the ambiance of the home is textural, open, and warm.