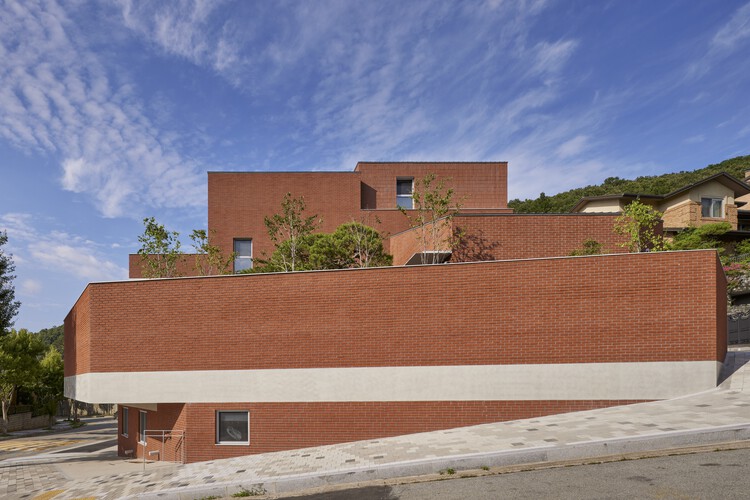 Text description provided by the architects. The family decided to demolish the old house they had lived in for a long time and build a new one in the same place. Because it was where they had lived for a long time, they knew the pros and cons of the site. They also had an experience living in various houses, which gave them a high understanding and expectation of what kind of house was right for the family. The site is located in the corner of a district where a similar shape of houses was built repeatedly. Three of the four sides are in contact with a ramp, and the height difference between the west and east sides of the site is 4.9 meters.

The size of the house was a task during the plan. The overall scale was planned to be larger than the surrounding buildings in the consultation stage with the family. It was initially a two-story house during the early study, but the family wanted to add a third floor. The obligatory sloping roof of the district code made this house even larger. Also, the solid fence for privacy has become another element that makes the house's volume even more significant than the surrounding.

The developer built most of the houses in the district with bricks, and rather than a single volume, they consisted of segmented volumes and roofs. Utilizing the characteristic elements of the surrounding could harmonize with the surrounding context and solve the problem of the size increased by the requirements. The architecture was divided into several volumes and lifted the third from the second floor. Roofs were sloped in two different directions. According to a single universal material, the bulkiness was divided into layers with a concrete slab strip, and the bricks were used in three different patterns.

After all, the element of familiar red brick houses commonly seen in Korea was the motif. Standard elements from Korea and abroad were reinterpreted or mixed in different ways so as not to be too new or cliché. A typical example is a pillar with a traditional Korean door. This pillar needed an appropriate size to receive four pairs of doors. Just as the architecture offsets the sense of volume, the posts were also divided into four vertical pieces and iron bands. The central iron column used the element from Mies Van der Rohe, the combination of wood and metal column was from Carlo Scarpa, and the iron band was an element seen in Korean traditional architectural assets.

As important as the design elements were visual openness and privacy coexistence. Since the client's family enjoyed outdoor life, they wanted to have access to the outdoors from anywhere in the house within keeping privacy. The first floor was a family space that was partitioned with doors instead of walls so rooms could open flexibly to the garden. The second floor was a private space, and the composition was quite different from the first floor. The windows were minimized to reduce exposure, and the height of the terrace railing was hiding most of them. Every room had individual terraces for outdoor access. The hallway was also designed with a courtyard to allow ventilation and light without windows exposed to the outside. These methods permitted both curtains and windows open while protecting privacy.

The interior space has a sense of openness and connection between the floors. The void space of the entrance vertically connects the first and second floors, and the courtyard right next to the void connects the second and third floors. The wall between the main bedroom and bathroom is short of creating openness even when doors are closed. The doors were designed to break the boundaries between the rooms when they are opened. This method connects the house vertically and horizontally.

Familiar elements can easily fit into the surrounding context and provide comfort while opposing elements can satisfy various requirements. Jeokhoje created something new by gathering standard features and was completed through opposing elements. The size and characteristics were meant to create harmony with the neighbors, and it had to satisfy privacy with visual openness simultaneously. Although the house borrowed familiar materials and methods from the surrounding, its reinterpretation of it is new. Furthermore, it is a work satisfied and harmonized from the standpoint of individuals and the public through elements of opposite and familiarity. 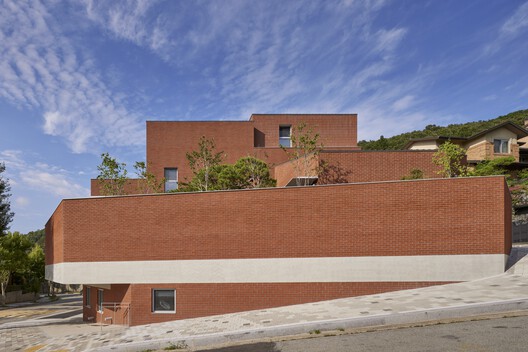