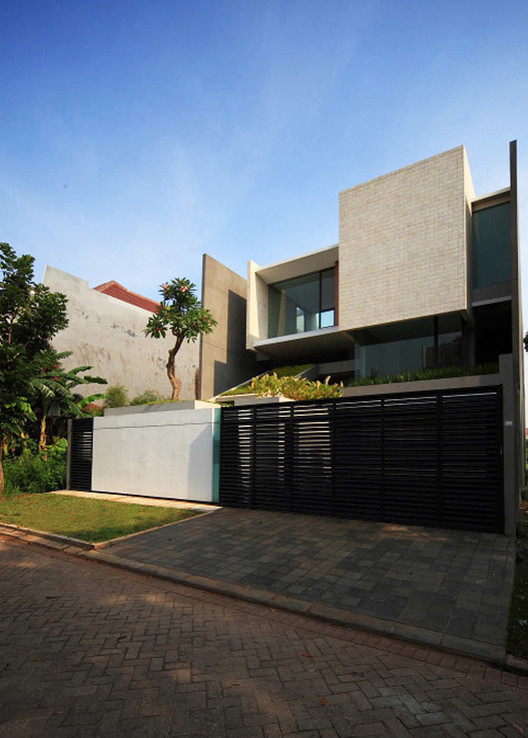 Text description provided by the architects. The initial idea in designing this residence is to create a house with good air circulation and natural lighting within its site, which is quite long compared to its surface appearance. The dimensions of the main building are made to extend towards the back to create a considerably large garden as a private view where it is located on the east of the building. Therefore, all the building’s openings are directed towards the garden to avoid heat from the sun, coming from the west in the evening. The intention of creating airflow to the inner courtyard was achieved by making use of the level difference between the guest room and the master room. With the gap between them, it was possible to create a flow of constant air towards the garden section of the building. The idea is also supported by the landscape, which is slightly slanted, as a way for the air to enter the inner courtyard. The landscape also works as a camouflage on the lower level guest room, as it emphasize on the east side of the structure which will appear like a one-leveled building with is only the master bedroom.

Because this residence is facing the north, we created a massive surface on the west, which is projected outwards to function as a hot buffer for the openings in the master and guest bedroom. Therefore, with a lower opening, the intensity of sunlight going into the room will not be too overwhelming. The surface is covered with skin marble stone that was specially craved to produce an accent in the overall facade of the building. On the west region of the building, service rooms, which include a powder room, stairs and a master bathroom, are particularly designed as a hot buffer.

Inside this house, there is a credenza television that act as the vocal point which made hanging on the void. On the inner side of the courtyard, we create a maximum opening, without any view blockage as far as 12 meters and frameless glass, with no columns, to create an ambience of a larger space and the sense of blending in with nature. On the side of the yard, a reflecting pond is build along the main room with the accent of a timber deck, right below the children’s bedroom. This yard area is the source of air circulation and natural light for the house.

The vertical circulation towards the upper level of the house is in the form of a cantilever stair with frameless glass railings, which is positioned right next to the living room. This creates a sense of unity within the main room and the upper level. In the upper floor, a connecting bridge is located between the master bedroom, children’s bedroom and study room. This bridge transverse right in the middle of the void, therefore the activities of the owner could be seen whether in the living room, dining room, study room or master bedroom. Also from this void, air circulation moves inwards to the upper level of the house and out through the air grill on the roof glass above the main stairs.