Save
Courtyard House with Seven Rooms / Takayuki Kuzushima and Associates 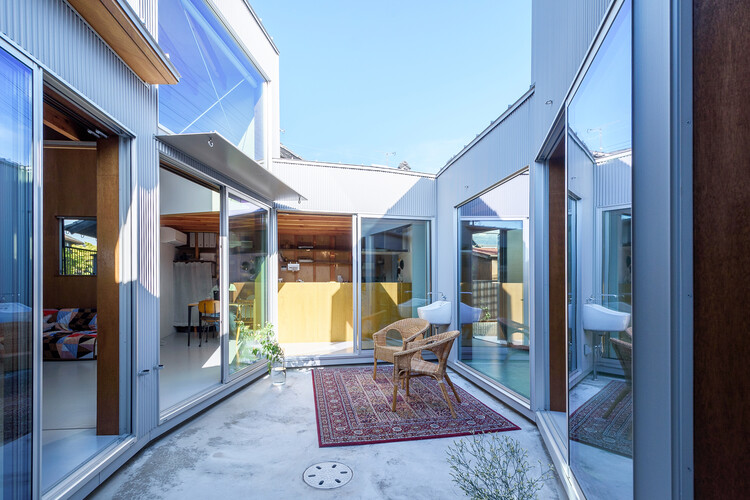 Build room in town, open room to room - A house built in the suburbs of Aichi Prefecture. The owner had a large number of images of the house, including furniture, lighting, various finishes, equipment, storage ideas, and use of the window area, which he had collected from SNS and magazines. The images were not always consistent; some were of bare concrete exteriors, some were of wood-paneled exteriors, some were of cool minimalist interiors, and some were of chaotic interiors. Convenient and rational storage ideas and tasteful antique furniture were equally aligned. These were fragments of requests for an ideal life, and I knew that they would continue to change day by day after the completion of the construction. Therefore, rather than trying to compose a space by selecting and choosing from a large number of images, we began the design process by considering the framework in which the various elements would overflow and resonate with each other.

The site is a quiet residential area lined with low-rise houses. The intersections in the neighborhood are not orthogonal to each other, and the town still retains its traditional irregular shape of the city block. The site also has a parallelogram shape. At first, we were considering a parallelogram-shaped volume, but we felt it unnatural that we needed to think about how to carve out the interior, apart from the relationship between the site and the volume. It seemed to me that the structure of the town and the structure of the house was not continuous.

Therefore, we divided the volume into several volumes, each of which should be directly opposite the boundary line of the site. The number of volumes was set to seven in consideration of the client's request, and seven rooms were built facing the boundary with the town. The beams of each room are set back from the site boundary, and a courtyard is located near the center of the site as a blank space away from the town. The courtyard is a collection of rooms that are based on the characteristics of the city block. In anticipation of the creation of various areas beyond the rooms, all the surfaces that border the courtyard are made of glass to connect the rooms at various distances from each other.

In other words, the rooms were opened up to each other. In addition, by using three types of interior wall finishes (1. columns exposure, 2. plywood OS coating, 3. plywood EP coating) while avoiding unification by room, I considered a way in which the walls of distant rooms could be connected to each other. By doing so, one can feel that one's room and the room across the courtyard are in the same area and that the distant room is closer than the room next door. The four finishes, three on the interior walls and one on the exterior walls, create a variety of colors in each location, like the ink that is created by CMYK. The composition of the seven rooms is replaced by an accumulation of many places. Here, furniture, lighting, miscellaneous knick-knacks, and toys scattered around the rooms also participate as elements of the space and resonate with each other as part of daily life.

I designed this house while thinking about the structure and history of the town that exists outside the rooms, and about the possibility of living with the passage of time that extends endlessly inside the rooms. The structure and finishes of the house are connected to these elements at various levels. This house is a collection of rooms as an intersection between the landscape of the town and daily life. 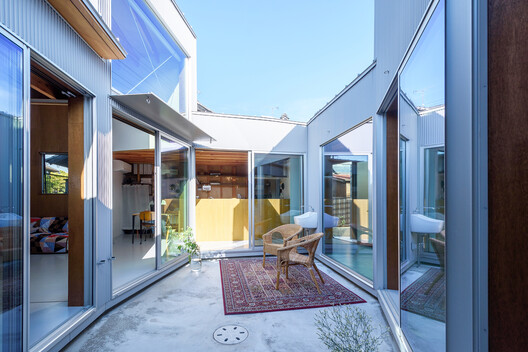