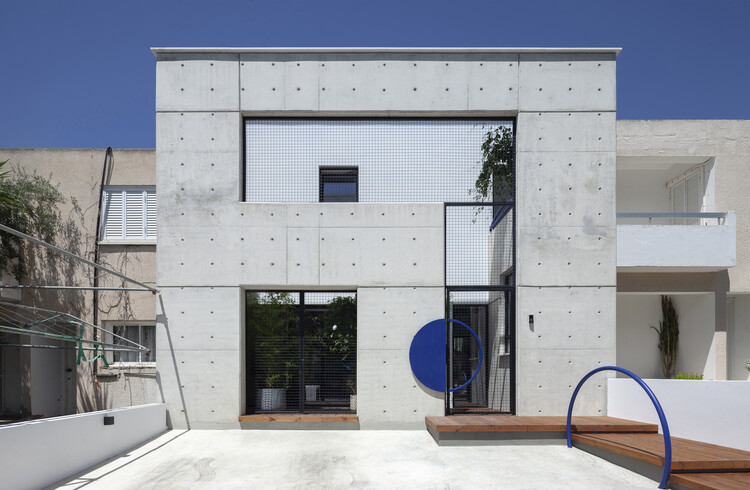 Text description provided by the architects. The house is built on the traces of a ruined building in a high-density refugee settlement in Nicosia, Cyprus. It is situated between two existing partition walls on a narrow land (​​189 m²). The Cypriot refugee camps were erected shortly after the summer of the Turkish invasion in 1974, to provide temporary accommodation for the Greek-Cypriot refugees who were forced to leave their homes because of the war. Today, these sites bear the signs of abandonment and decay and are more like urban crevices interrupting the continuity of the city. The restrictive building regulations that are applied in these sites, indicate a complex condition raising questions regarding their readjustment to the contemporary ways of residential living.

The new house is constructed to accommodate the housing needs of a young family of four. The man of the family inherited the old house from his grandfather. The budget was limited. The main idea of the architectural proposal is developed around the notions of boundary and intermediate space. What we propose here, is a vertical boundary that stands at a distance of 1.3 meters in front of the existing housing complex. This is a 6.3 meters high wall of exposed reinforced concrete, carved with holes in its skin which are covered by perforated metal surfaces.

The successful interplay between the blank and structured parts of the wall purposefully controls the passage of light inside the house and offers levels of privacy and security, cross ventilation, and a variety of optical escapes. An open dialogue is developed between the building and the existing urban landscape that offers a vast range of spatial and visual conditions: sometimes it frames and highlights moments from the particular everyday life of the refugee camp, it underlines the need for introversion while sometimes it projects snapshots from the family lived in a theatrical way.

Between the main building and the vertical wall, small courtyards and terraces are generated, where the main spaces of the house are extended. Internally, the proposed spaces are organized in relation to the vertical wall and a courtyard that enters from the back of the ground level to end up in the center of the house. At the core of the house, mass was removed from the volume of the building by vertically carving it. In this way, we achieve visual communication between the two floors, the provision of abundant daylight, and the framing of the sky. In the center of this blank space, a mastic tree has been planted, which is framed by a circular seating surface to transform it into a vital place for gathering and communication between family members.

As in the rest of the outdoor spaces, here the void is filled with metal surfaces allowing natural vegetation to climb. Cypriot plants such as jasmine, honeysuckle, and pandorea, have been carefully preserved or transplanted in all the outdoor spaces. The refreshing nature enters the house and climbs upon its skin in an everyday life that embraces the garden and turns towards it.