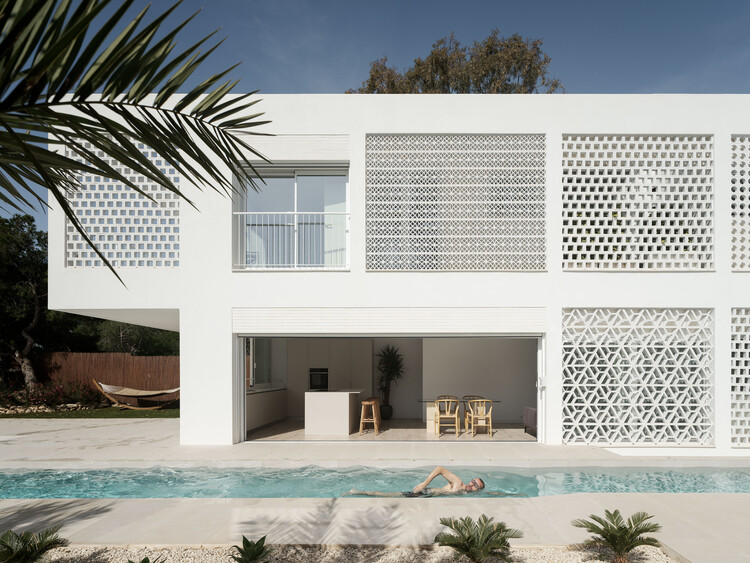 Text description provided by the architects. The origin of the design of this singular house located in Cabo de las Huertas in Alicante (southeast Spain) can be summed up in three short stories. The first and most obvious is the one that refers to the client, who dreams of swimming regularly again. That is why the first decision when drawing the floor plan is to fit a 25m long swimming lane on the plot. This fact, together with the unevenness of the terrain, explains the flight of the L-shaped second floor over the pool and first floor, as well as the access sequence to the interior.

However, the second story has to do with a growing interest in PLAYstudio for the idea of a non-nostalgic REMAKE of certain local architectures as opposed to the usual import of global, foreign and showier clichés and types. We claim a kind of new identity of the Mediterranean White Coast through the re-celebration, in this case, of the architectures of our first and modest Modern Movement that was the typological standard in the growth of the city of Alicante towards the coast in the 1960s -as it happened in other coastal municipalities. Gestures such as giving visibility to the structural grid and filling its cells with full brick or lattice surfaces, for example, form a strong identity in the built environment of Alicante’s beaches, where this house is located and which, on the other hand, configures the client’s everyday imaginary.

It was this imaginary of the client that also introduces the third story. White has practically become the main aesthetic reference on the White Coast, which has seen how in recent decades cubic, pristine and super white imposing and aseptic single-family houses have been progressively installed. As a consequence, the client, who is himself a victim of this other imaginary, imposes white as a starting condition. Hence the opportunity to bring another line of research in the office: the More Than White Houses, a series of single-family houses installed on the coast that seek to flee from the pristine and cubic white as a default solution. This is why, in conjunction with what was mentioned before, white becomes more complex and nuanced in a painted structure that becomes explicit, matt brick surfaces, satin-finished carpentry or vitrified latticework... but all in white, of course. In short, many types of white are implemented to form, not without irony (another common resource in PLAY), a kind of “White on White”.