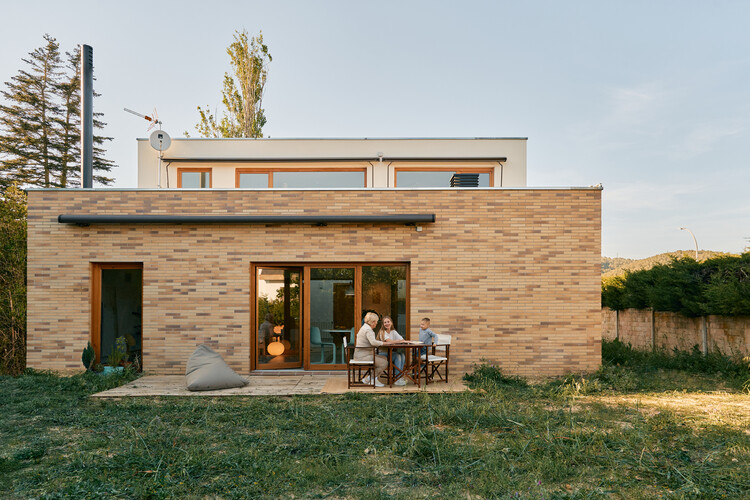 Text description provided by the architects. The aim of the project is to achieve a single-family house with zero consumption and a healthy interior environment through bioclimatic strategies.

This house is based on a tight programme of 90 m2, thus, in order to optimise the climatic performance of a limited surface area, we decided to opt for a compact square floor plan, which has the advantage of avoiding thermal losses in the façades but also the disadvantage of not allowing direct sunlight to the south in the rear rooms.

For this reason, a central space that captures light and heat was designed in the form of a covered atrium with openings to the south in the upper part that rises above the roof. The rooms of this passive house are thus organised around a bioclimatic atrium, a central double-height space that accumulates heat thanks to an upper opening to the south and that allows to temper the rooms in the north zone and generate crossed ventilation.

In this way the atrium generates a second façade for solar gain and stores hot air that we will use to our advantage for the ventilation of the house.

We thus achieve a central space with stratified air (the hot air rises) which is also a solar collector in its upper part and has a multipurpose programme, which can be used as an extra living room, dining room or simply a free access space to night areas.

In addition, the clients expressly request to have views to the north and for this purpose the atrium has a small mezzanine accessible with a library-type staircase that can be moved along the atrium or hidden when it is not necessary.

The construction system is based on a double wall of interior stone and exterior brickwork with insulation between them. In the access area, the exposed brick wall generates a semi-open lattice that allows the access to the house to stand out. The solar protection of the openings is provided by external textile blinds.

To generate hot water and heating on cold winter days, we use a biomass boiler with pellets that feeds a system of conventional radiators.

The air renewal in this house is carried out through the central atrium by means of ventilators that introduce air from the highest point of the gallery and whose extraction is located in the wet areas of the bathrooms and kitchen.