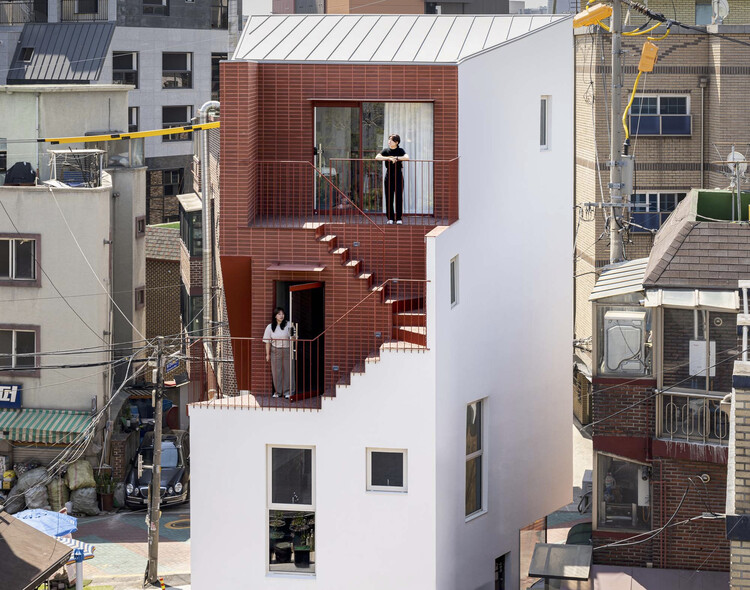 Text description provided by the architects. The alleys of Sangam-dong are always busy. In the morning, they are packed with people hurrying to work or school; in the afternoon, with people visiting its hip restaurants and cafes; and at night, with people grabbing a drink after work. The little building by the name of Red Hole stands somewhere in the hustle and bustle of these alleys.

The land on which Red Hole sits used to be under an old, unoccupied single-floor house. The first visit to the place made it feel as though time had stopped around it, in contrast to the surrounding environment changing rapidly around the airport railroad.  Its area size of 182m2 and location at the corner of a street was not the most ideal, but the building could serve as the facade of the bustling street of Sangam-dong. We hoped to build a commercial space that naturally draws the attention and steps of people passing by, thereby adding a sense of liveliness to the streets.

As with all commercial buildings, space planning is directly related to profitability. We first had to come to terms with the multi-angular site that stretched vertically. We decided to allow some space between the building and its adjacent neighbors and dramatically open up the space subject to slant line restrictions for daylight. Given that, we would secure the maximum interior area and accessibility to make it profitable and practical. The center of the building would blend in with the exterior so that the space under the stairs may also be utilized as an interior space. The back of the fourth floor, which had to remain empty because of the slant line restrictions for daylight, was designed into a terrace stretching naturally onto the stairs. As a result, the dynamic design and path of the stairway add a sense of liveliness to the streets.

The most important element in planning the interior space was ensuring that the occupant can feel a sense of openness. Floor-to-ceiling windows were placed at the front of each floor to maximize this openness, given the building’s small area. The corner windows on the ground floor, with the best accessibility, were strategically placed to encourage the line of sight from the outside naturally extending to the inside. The customers visiting the client’s fourth-floor hair salon can take in the views of Sangam-dong from the salon’s front floor-to-ceiling windows and back terrace.

A substantial amount of brainstorming took place before deciding on the color of the facade and the exterior materials in order to make Red Hole a symbol of the street. The building adopted a simple white facade to make its small area appear bigger than it actually is. The stairs and the back of the building were covered in red brick tiles for contrast, making the building resemble a piece of bitten-off red velvet cake. The color red was added in between gaps in the twisted form of the facade to give it a little character. Thanks to these facade elements, Red Hole has transformed into a multilateral building offering a sense of distinction that leaves a lasting impression on the passers-by.

Having begun as a confined space on the street of Sangam-dong, Red Hole is now one of the street’s most gazed at and visited buildings. We anticipate that it will continue to be remembered as "the red staircase house" to those who pass the alley. 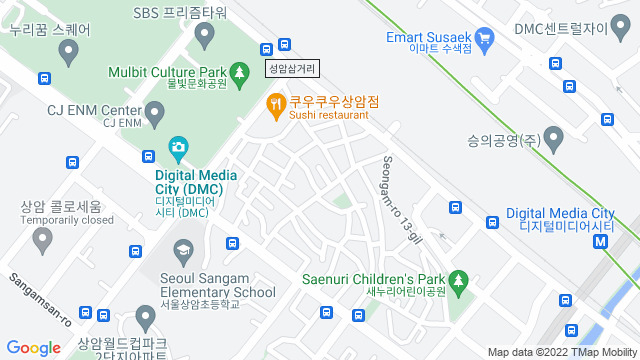 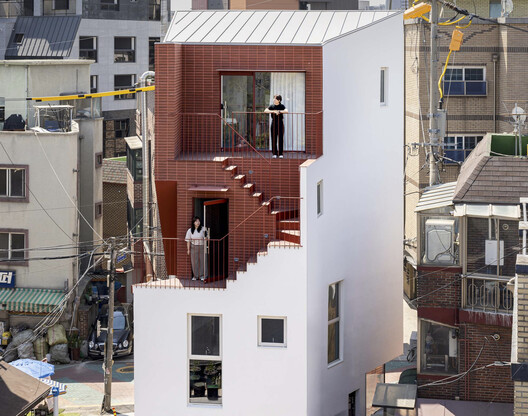