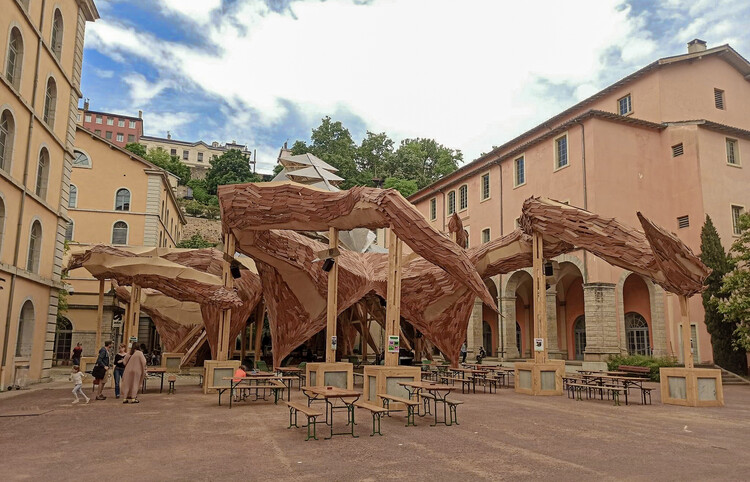 Text description provided by the architects. Le Kraken is an ephemeral installation that inhabits the central esplanade of the historical site that hosts Les SUBS and the fine arts university of Lyon ENSBA. The Kracken in few figures: 25m wide, 15m high, 180m of tentacles, 1000m² of proclaimed wood, 6 weeks of construction, 30 professionals & students mobilized.

A chilling effect takes place upon one’s skin when realizing the size of the Kraken (UV lab), the wooden structure that crawled out of the water belongs to another epoch or maybe a different history. Yet here it is, spreading its tentacles over the “LES SUBS and ENSBA LYON” for us to encounter.

The sublime Ora and the chilling effect rapidly disappear once we walk through the Kraken, touch it, and discover more making the beast less terrifying, it hosts events, and spectacles at the same time it stands tall for us to gaze at from distance.

One can look at the Kraken in three different ways. First, using the pronoun “it” is problematic; the Kraken is “vivant”, and the installation approach to it, gives it a lively hood. We can touch it, walk it in it, climb it, at the same time it’s organic; not from a representational point of view but an actual one. In other words, the wood itself has a “life”: it breathes, shrinks, it changes through time. Size and the aesthetics of the sublime play a minor role in this case; since usually, one can’t touch a sublime work of art, ask yourself, can you touch Michel Angelo’s David? can you slide your hand upon the shining surface of Jeff Koons's giant Balloon Dog?

Another aspect the Kraken represents is the ability to question the architectural integrity, betting on the paradoxical sense of collapse VS standing tall. But the sense of fragility that floats in the sphere -the Kraken creates- also conveys the ability to bring “life” to a structure that is functional yet doesn’t respect the traditional space measurements and their pre-set designs. A grotesque figure, where “inside” and “outside” are vaguely distinguished; activating a process of “inclusion”. It’s more than a gest; it’s an ongoing Praxis as if aliments of poor architecture, false- instability, and mythological indetermination entangle together to re-introduce human activity as a form of dialogue, play, and discovery.

A third way to look at the Kraken is to consider it a ”beast”, a political figure that comes from outside the realm of traditional ontological categories. The Beast has the ability to run freely bypassing traditional boundaries, his freedom is only limited by his desires, and unexpected-free-will. that is what makes the Kraken and his location such a representation of bypassing the traditional order of things, even though he doesn’t “belong”, he is present; threatening what’s around it, leaving us to wonder and ask “what else he might do?”, “where else he might go? 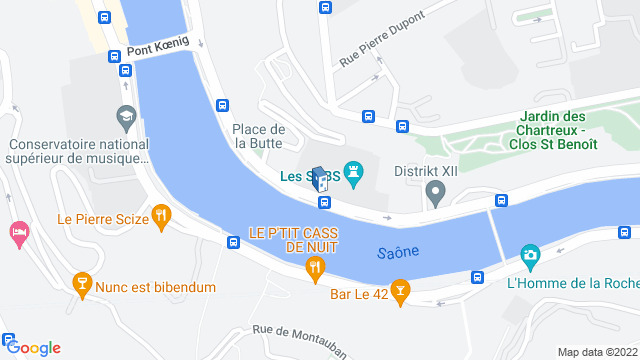 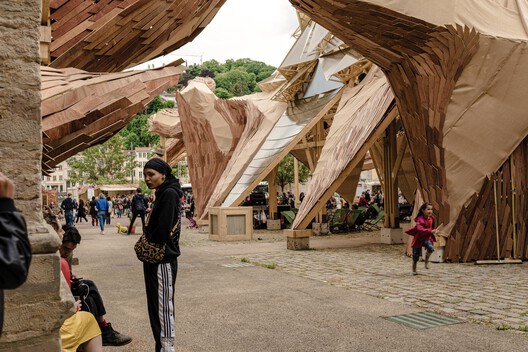 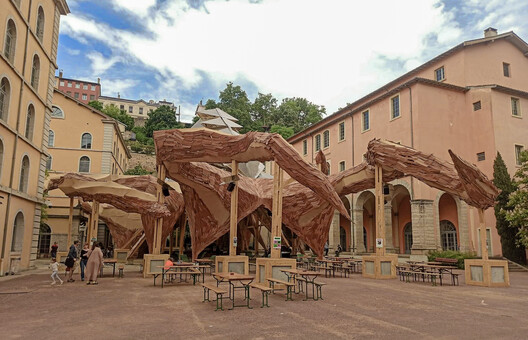