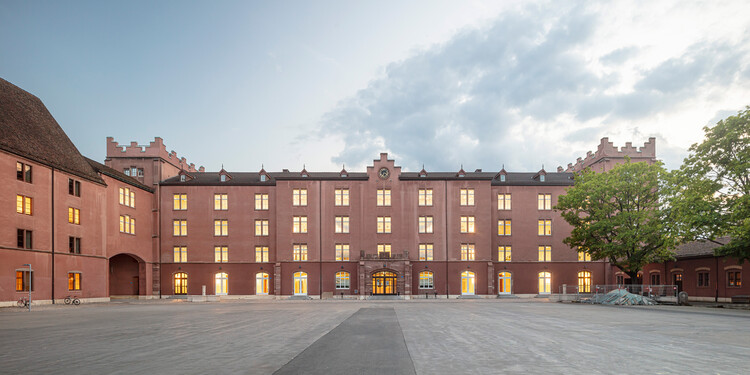 Text description provided by the architects. The transformation of a pre-existing building into a new cultural center has become a model for circular architecture and re-use: built 150 years ago as a military barracks, this seminal building has just become a new public nexus in the heart of Basel. In 2013, Miquel del Rio and Hans Focketyn won the international competition to reconceptualize the existing Basel Barracks main building, creating a cultural beacon that, after an eight-year transformation process, is now open to the public, the city, and the future.

Historical Framework. 150 years ago, the Swiss army built a military barracks complex in the middle of the city, forming an enclosed area that excluded the general public. The site was consequently abandoned in 1966. Over the following decades, its vast buildings and a large open area became organically embedded in Basel as a cherished social and cultural hub called “Kaserne area”, being “Kaserne” the German word for “barracks”. This civic and communal pollination process turned the area into a popular locale for cultural, religious, and collective expression. It hosts several cultural facilities, multifunctional music and event spaces, and several restaurants and bars, all adjacent to a large public park. However, the most prominent building of the complex never went through this evolution. Located at the far end of the site and blocking access to the river Rhein, it bypassed this social transformation, despite being the primary structure in the compound. Given its central location in Basel, the city launched an international competition in 2013 to renew the 9.000 m2 building, now rebranded as kHaus. The winning design was presented by Hans Focketyn and Miquel del Río of FOCKETYN DEL RIO STUDIO.

Current Exterior. The new and updated kHaus provides the city of Basel with a contemporary and multifunctional cultural facility and new public areas in a historic and central location. The conversion unites two of the most iconic public spaces in Basel: the river and the Kaserne courtyard, which are now linked for the first time and publicly accessible on both sides. This new urban hub facilitates connections on a city-wide scale, creating a new gathering place for the community, animated by multiple activities.

At the south end of the courtyard, a classical arch with a concrete frame was carved out to serve as a new opening. Along with two additional passages on the periphery of the structure, these corridors provide permanent public access to the river throughout the year. Now, the building can be traversed via various paths at any time of the day.

Retaining the building’s original composition and spatial logic, FDRS turned the kHaus into an open and porous social center for many activities at the riverfront. Referencing the building and the site's history, the architects subtly reconfigured its exterior while keeping its character intact. Its facade was gently altered by enlarging all of the ground floor windows into doors, converting the building into an open and accessible structure, filled with life and the echoes of many different languages.

Current Interior. The core of the building is the Plaza: an extensive, indoor public space that is located between the two facades, the river, and the courtyard. Over thirteen meters in height, it hosts activities year-round. Conceived as the primary public access to the building, the Plaza is intended for everyone: a place to go on wet winter days or hot summer afternoons. A sculptural stairway connects the courtyard down to the river.

The interior of the kHaus is defined by plurality and versatility: In its center is the public Plaza, and directly above is an events and performance space. Spread throughout the upper five floors are art and rehearsal studios, a matrix of multifunctional rooms, restaurants, dining areas, and spaces for worship, all linked by the central Plaza and three vertical stairways.

More generally, the kHaus and its programmatic complexity can be understood as an assemblage of disparate uses, each with its own particular translation into space, materials, and techniques: all under one roof. Confronted with this disparity, the architects combined different areas into a cohesive whole – each with its own character, colors, and sounds, based on the dual logic of allowing each part to develop its distinct potential while maintaining a coherent ensemble.

Retaining its structural elements and adapting them to the various uses of a building for the twenty-first century, the architects discreetly revolutionized the Kaserne main building to allow for functionality and flexibility, making it further adaptable and ready for the future through the means of a "poly-typology" of rooms. Rooms can become corridors, and corridors can become rooms, increasing the interior’s scalability and flexibility. Open circulation becomes ubiquitous and is channeled through two vertical stairways.

Future Manifestations. A building that used to be a barrier is now open and accessible. The 45 million Swiss Franc transformation is Basel's first publicly funded investment in a large-scale cultural facility in the Kleinbasel district. It is now a 9.000 m2 magnet for the city and a beacon of its inclusive and multicultural orientation. The new Kaserne has achieved everything it set out to do: it forges new connections, animates both facades, links the river to the courtyard, and, thanks to the various spaces in the building, is flexible enough to accommodate many uses. For now, it is a cultural center, but who knows what it will become. The Kaserne area has lived a hundred lives in the past and its main building will continue to reincarnate in the future. 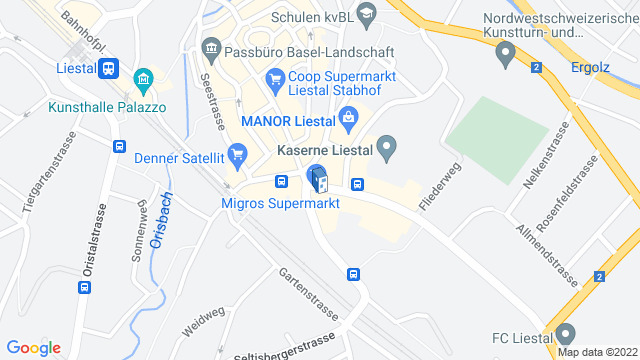 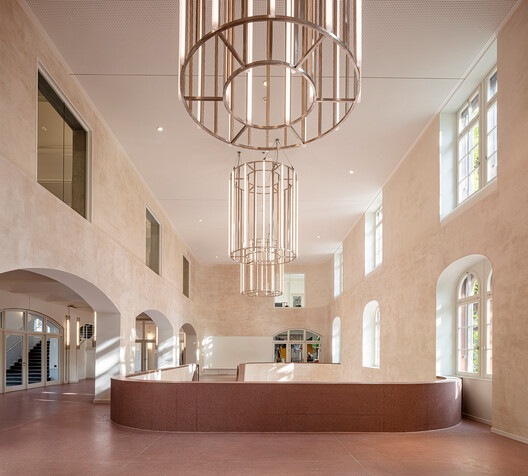