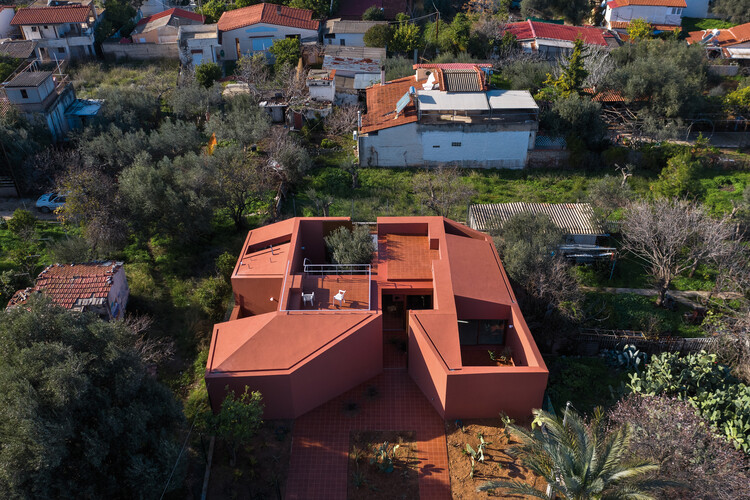 Text description provided by the architects. Fundamental questions about site, context, and landscape were the driving forces behind the design of this modest summer home on the island of Salamis, in the Saronic Gulf near Athens. While the history of the island is dominated by its geography -- in antiquity, the narrow straights separating the island from the mainland were famously instrumental in the Battle of Salamis -- the recent demise of the area's long and powerful role in the Greek shipbuilding industry emits a palpable sense of ambiguity about the island's future.

A mirror to the uncertainty of its post-industrial landscape, Salamis' topographic position between land and sea, city and nature, resists the typical characterizations of a Greek island get-away. Lacking the aesthetic traits and assumed extroversion of the typical seaside destination, Salamis is home to a decidedly inward-looking community of residents.

The plot itself is small and flat, lacking a view and without particularly remarkable features. Its primary virtues are an olive tree and a well. The house interprets the topography of the site through the mechanism of "introspection", organized as a perimeter condition that develops its own self-sufficient virtues through the fundamental resources of climate and outdoor space.

In contrast to most of the island's year-round residences, which tend to exhibit a make-shift, "prosthetic" approach to spatial expansion through the chronic accumulation of built add-ons, the new summer house is conceived as a form of  "subtraction" from a single material volume containing sculptural voids. In this sense, the idea of going away on holiday is less about reinstating all of the material objects of city life, and more about the metaphor of shedding one's clothes in order to enjoy the tranquility of a home away from home.

Exterior walls give the appearance of a monolithic volume, concealing the existence of a large interior courtyard at the center. A single, narrow passage leads visitors directly from the front yard to the courtyard, while a secondary, twin passage leads from the courtyard to the pool garden at the opposite end of the plot. Within the central courtyard, smaller glass volumes positioned around the olive tree provide the main living spaces.

These are lined with full-height sliding glass doors that merge indoor and outdoor space at the same time that they control circulation from one end of the courtyard to the other. Maximum flexibility of movement is provided when all sliding glass doors are open, including the front and back gates of the house, creating a single, uninterrupted chain of outdoor spaces that extends the entire length of the site, as if splitting the house into two.

All "private" areas within the program (bedrooms, bathrooms, and service areas) are concealed within the heavy exterior walls in a series of small, cave-like spaces. These are paired with secondary courtyards that provide light and porosity to the dense sequence of perimeter spaces. A guest wing operates independently from the rest of the house and is accessed through its own secondary courtyard, which also contains an old well. 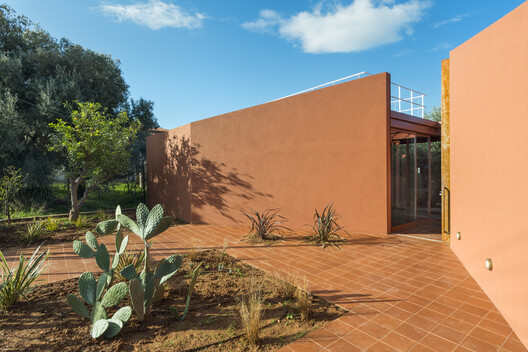 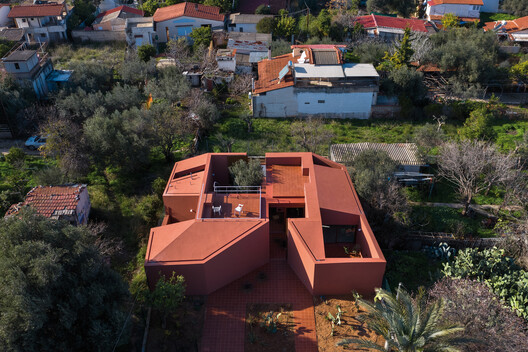