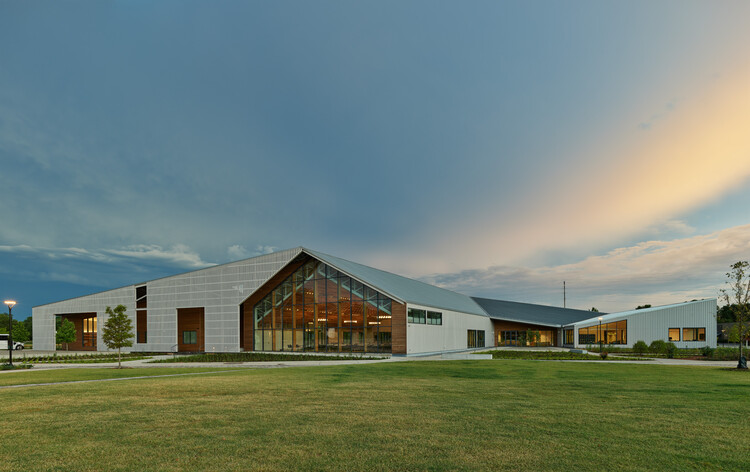 Text description provided by the architects. The Home Building is the central hub at Thaden School, a new high school in Bentonville, Arkansas, where students learn by doing. The building’s design, much like the school’s 26-acre campus, strives to establish an innovative vision for the future while reflecting the rich, pastoral heritage of the surrounding landscape. The Thaden School challenges traditional paradigms of education.

After first leading the completion of the Master Plan for the campus (a collaborative effort between EskewDumezRipple, Marlon Blackwell Architects, Andropogon, and CMTA), EskewDumezRipple was tasked with designing the 34,000-square-foot Home Building, the heart of all student activities on campus.

Beyond the physical centrality of its location, the Home Building serves as both the social and spiritual center for students. Like the hearth of the campus, the building provides an expansive dining hall, where all of the campuses comes together for meals, as well as a teaching kitchen, the student bookstore, a library, and several unstructured lounge and study spaces. In the dining hall, it celebrates the material technology within.

A veil of poplar slats mounted underneath enormous truss frames reveals, rather than concealing, the structural design and brings a deep warmth to a space intended for communal dining. The design reconciles seemingly contradictory notions: lofty ambitions for the building’s design with the humble nature of local, vernacular architecture.

The building takes visual cues from the region itself, with board and batten facades and all-wood construction incorporating the beauty of local, vernacular architecture. The building stretches across the landscape, bending and wrapping to define a new kind of campus, creating a network of outdoor spaces of varying scales, textures, and uses that interact with the diverse interior spaces. Indoor-outdoor relationships are explored at every opportunity.

An ever-present “water lab” holds a majority of the rainwater that’s collected on site. while simultaneously providing a unique opportunity for students to learn via their surroundings. The design employs common materials and methods in uncommon ways. Using techniques typically found in residential design, the design pushed the simple form to its limit, opening the floor plan to create porches and courtyards and gently sloping the roof up to a dramatic 38-foot-tall peak at its center.

The roof plane enshrouds the simple gable form of the dining hall. A skyward opening punctures the roof of the outdoor courtyard where students frequently congregate outside the dining hall. Students take classes in a state-of-the-art teaching kitchen—one of the truly unique spaces in the Home Building— one that deeply espouses the school’s “learning by doing” mantra.

Stormwater management (91% is managed onsite) is accomplished via a distributed strategy, with several detention areas across the site. In the rear of the Home Building,  a “water lab,” detains the majority of rainwater, while offering a unique “classroom outside the classroom”—an opportunity for students to learn directly from their surroundings. Low-flow plumbing fixtures are used throughout the building which will save roughly 30, or about 100,000 gallons of water each year.

A geothermal well field sited directly on the large quad in front of the Home Building was selected instead of a traditional cooling tower, resulting in an additional 1.5M gallons of water savings annually. The Home Building was designed to achieve an Energy Use Intensity (EUI) of 23 (a school building recording 25 EUI or less is considered to be Zero Energy Ready). The later addition of a rooftop photovoltaic array could result likely achieve Zero Energy (ZE).

A dedicated outdoor air system ensures that occupants have fresh air throughout the entire building. By bringing all outdoor air into the building at a single location (instead of at each heat pump zone) it can be passed through an enthalpy wheel which transfers heat from the exhaust air to the incoming air which also provides dehumidification. 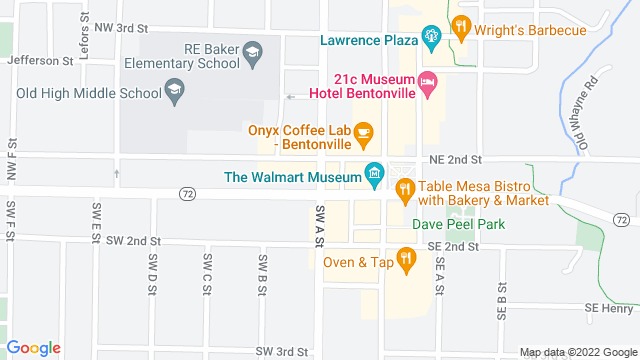