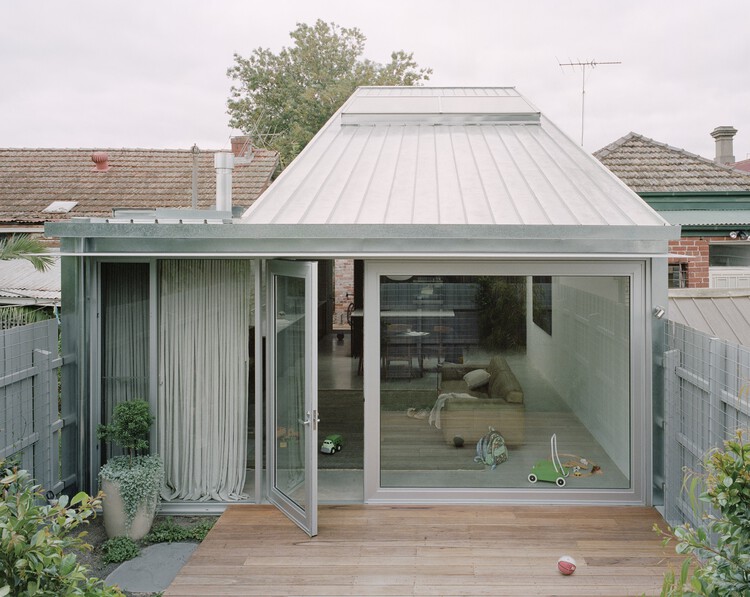 Text description provided by the architects. Northcote Terrace sought to re-imagine a tired single storey terrace house on a small allotment into a new home for a young family. The site is situated at the base of Rucker’s Hill and would previously have formed part of the MerrI Merri flood plain. The grain of European urbanisation was driven by industries such as slaughterhouses and brickworks, giving the immediate precinct a working-class character, this residual grain is still evident today. The site itself is characterised by its narrow width, its south facing orientation and the existing semi-detached brick Victorian Terrace. Due to its orientation and marginal setbacks, the internal spaces of the existing dwelling were dark, with no aspect or connection to external amenity.

The project addresses the constraints of the site by engaging the building with the sky, both metaphorically and through experience. A series of strategically placed roof windows draw the eye upwards, framing the ever-changing patterns and colours of the sky. Secondary skylights, studying the path of the sun, bringing soft light, texture, and shadow deep into the living space.

The expressive saw tooth form of the new addition is determined in part by the internal experience, but also responds to its immediate context. Perched behind the existing brick parapet, the roof of the new addition pitches sharply down to the south to minimize visual bulk and overshadowing to the adjoining neighbours. The galvanized cladding, durable and robust, reflects the hues of the sky, dissolving the mass further, while giving the new addition its character.

The palette of materials is restrained, economic and seek to use the inherent qualities of the material to provide the buildings character and reinforce the relationship of the building to the sky. Existing and re-purposed brick has been stripped back and expressed throughout the ground floor to provide both texture and grounding. A burnished slab, with hydronic heating, provides additional thermal mass and contrasts with the ethereal volume above. The first floor framing is expressed providing lightness and tactility, with white plasterboard to the upper level providing a recessive surface that accentuates the apertures to the sky. Ventilation panels are located throughout the upper levels to encourage cross flow ventilation, while the large roof collects water for the landscape and toilets.

In contrast to the business and grit of the surrounding streetscapes, Northcote Terrace seeks to create a quiet and repairing space that is informed by the rituals of the domestic. In part, this is achieved by an efficient and adaptable use of space which facilitates the evolving requirements of a young family. 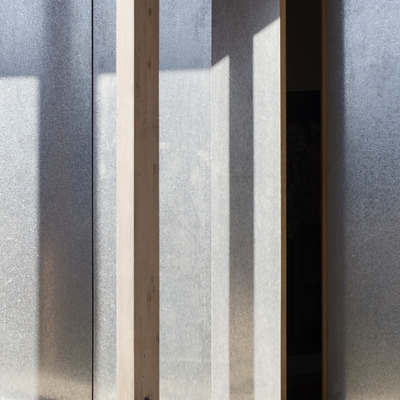