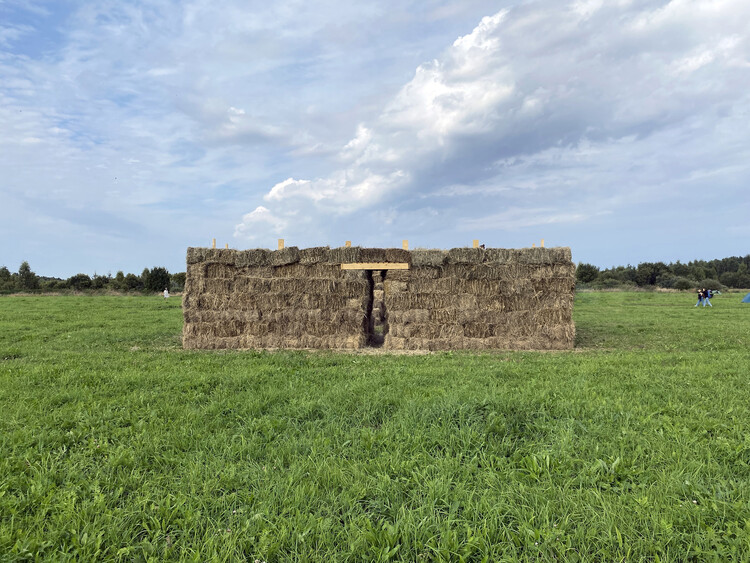 Text description provided by the architects. The object was designed for the Signal 2021 music festival in Nikola-Lenivets and was built as a winning proposal in the Nature Lifecycle category. This temporary pavilion is a space for connecting the public and the personal, natural, and human — a hidden amphitheater, intended for festival visitors who, after active recreation with loud music, can find themselves in a quiet place. A simple form, a seemingly massive wall — all this is made of soft hay. The pavilion existed for three days of the festival, and then was ruined and handed over to local farmers.

This work reflects architecture not only as a series of states but also as a permanent spatial structure. On the one hand, it is a temporary pavilion built for the period of the festival: a public space made of hay cannot exist for a long time and, when used, will inevitably turn into ruins. On the other hand, the structure and the plot of penetration into a secret room (not obvious from the outside space) do not directly depend on materiality. The form will exist in photographs and memories of people, and the material from which the object is built will repeat the chain of transformations over and over again: grass, bales, animal feed, etc.

A music festival held in such a picturesque place in itself presupposes a mixture of culture and nature, a constant change of events. On the scale of the event, the pavilion can be understood as something opposite to what is happening around: instead of a noisy open-air club, a private space is created. Outside, there are walls with two wide and two narrow passages, inside there is a sacred space, a secret amphitheater of calm and silence. The pavilion absorbs sounds, and a quiet place is formed inside, where it is difficult to hear speech.

The construction site is located far from large cities. This circumstance created difficulties with logistics and access to construction materials and equipment. Almost all preparatory work was done manually by a team of volunteers. As mentioned above, the life cycle of the pavilion involved its disposal as animal feed. Therefore, in the process of work, it was necessary to establish contact with the local community of farmers, not only as suppliers of hay but also as future potential users of it after the dismantling of the pavilion.

The main building material is hay bales measuring 400x500x800 mm, each weighing about 17-20 kilograms. This material involved manual stacking, which turned construction into hard, low-tech work. As a result, 23 tons of hay were moved and stacked along the outer and inner perimeter. The rigidity of the pavilion was provided by a wooden frame, bales of hay were manually tied to the frame and tied together with a rope. 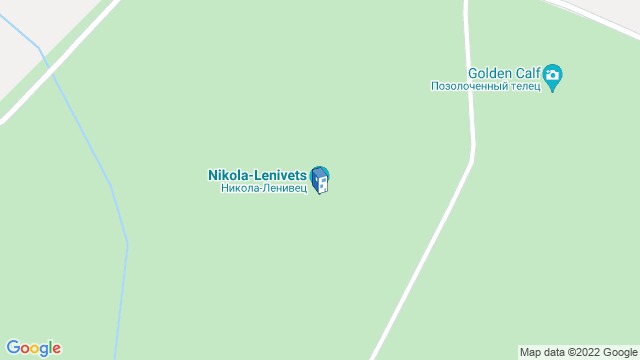 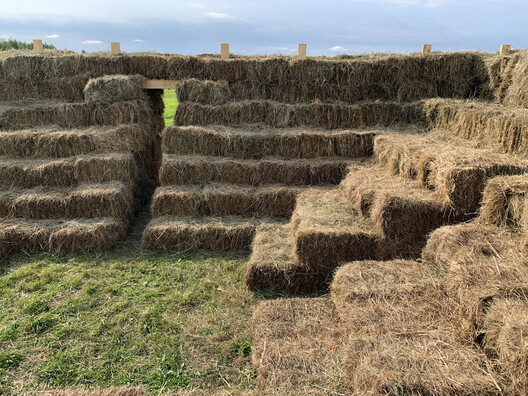 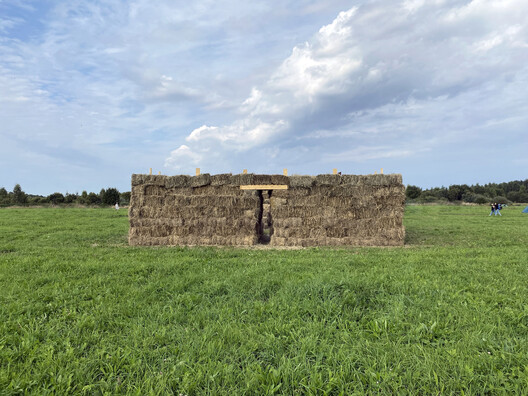