Save
Don't Let Me Be Lonely Cabin / Common Accounts 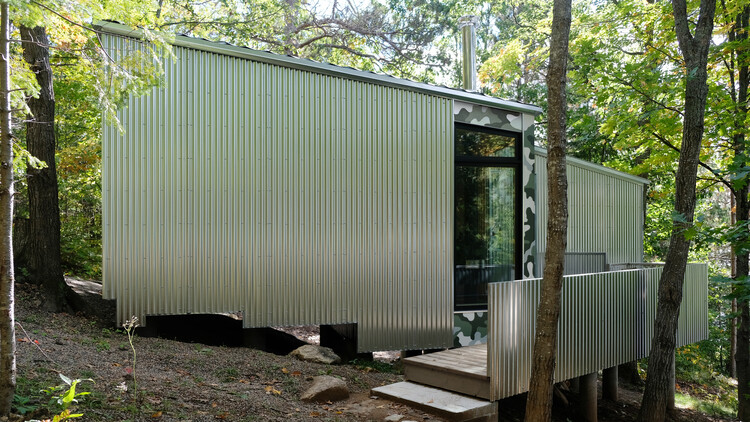 Text description provided by the architects. Located in South Algonquin Township, Ontario, Canada, 'Don’t Let Me Be Lonely is a lakeside cabin designed to shelter the queering of leisure. Among those, it hosts are a gay throuple whose needs formed a particular brief that shaped the project’s conceptual core.

Don’t Let Me Be Lonely is named for a feeling. It is a satellite building in orbit of a larger cottage nearby. Tucked away in the woods, the cabin’s form responds to the sloping bedrock on which it rests. The roof is a continuous, flat plane that further adapts the building’s trajectory to a single surface. All program is hosted on a stepped interior floor that approximates the topography below: a platform for the body and the activity it sponsors. “The section of the cabin learns from Beatriz Colomina's interpretation of the domestic voyeurism in architect Adolf Loos' villas,” says Gertler. “Similarly, Don't Let Me Be Lonely is a machine for the staging, contemplation, and cultivation of the bodies it hosts,” adds Bragado.

Platforming the self and queer desire is one dimension of the building's effect. “Don’t Let Me Be Lonely elaborates the sociality inherent to a relationship of three people and finds an architectural idiom to support and nurture it,” says Gertler. The various levels of the floor designate zones for separate and simultaneous use and the two beds—one large, one small—that punctuate the cabin's two polls put the inhabitants at the center of it all.

The enclosure is rather hermetic: thick, spray foam-filled walls clad in stainless steel limit cellular service. Meanwhile, Douglas Fir Plywood is used to wrap the interior walls and ceiling. “Once inside, we wanted to produce a mediated connection to the outdoors through the staging of materials, views, and sound. One can identify this strategy in many of John Lautner's LA houses,” says Bragado. “From the outside, his houses often feel alien to the site, while the interiors frame precisely calibrated relationships to the context at near and distant scales,” adds Gertler. “Lautner’s body of work resonates also with a tension between the urban and the ‘great outdoors,’ between being plugged in and off-grid—or off-world—which we wanted to advance in this project,” says Bragado.

In Don't Let Me Be Lonely, this translated to a conflict between a sense of belonging—to the main house, to the larger family, to the larger site—and a sense of being off at the margins, at arm's length, with a smaller group. The new cabin is only a few meters from the existing cottage where the rest of the family stays but is not visible from any of its windows. Further, Don’t Let Me Be Lonely provides a zone free from the cat hair and allergens entrenched in the existing cabin, which has been a concern for its allergic occupants.

"We’ve been interested in a long time in the significance of the lawnmower and the barbecue, technological artifacts which conform to the organic and in turn create specific cultural, social, and biological landscapes” states Bragado. “'Don’t Let Me Be Lonely is a similar device, but one which shelters the queering of leisure for its inhabitants," says Gertler. 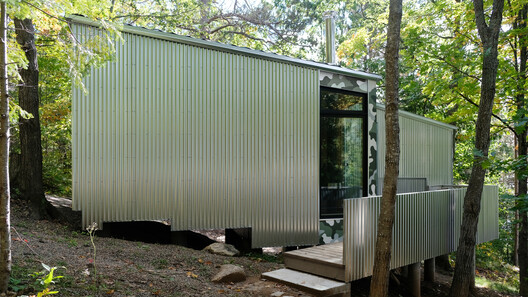