The city of Venice has decided to replace the glass on Santiago Calatrava’s Ponte della Costituzione with stone, as the slick surface was the cause of numerous incidents. The decision comes after several attempts to limit slips using resin and non-slip stickers, even placing keep-off signs on the glass surface when the winter weather rendered the floor increasingly dangerous. Inaugurated in 2008, the bridge has been the subject of controversy and protest from the onset, as the building costs and timeframe surpassed initial estimates and complaints about falls began early on.

The slippery glass surface of the bridge across the Grand Canal caused numerous serious incidents, which resulted in several lawsuits addressed to the administration. In 2018, some of the glass portions were replaced with trachyte stone, but the interventions didn’t prevent further accidents; therefore, the administration raised 500,000 euros to replace the entire glass surface, arguing that pedestrian safety outweighs the aesthetic intentions. The plan will now need to be approved by structural engineers and the city’s architectural authority.

The replacement of the glass surface constitutes yet another chapter in the city’s journey to overcome the project’s shortcoming. In 2013, following criticism for the lack of wheelchair access, the city installed a lift and cabin, later dismantled as the solution was deemed too slow and too hot in summer. In 2014, the city of Venice sued Calatrava for negligence, arguing that the architect failed to account for the number of tourists the bridge will serve and what the heavy traffic would mean for the wear and tear of the structure. While commercial luggage carts are forbidden in Venice, their use has caused extensive damage to the bridge, leading to the replacement of the initial glass panes.

After the publishing of this feature, the office of Santiago Calatrava shared with Archdaily the following statement: “Ponte della Costituzione has been highly praised by the city of Venice and its users since opening in 2008, becoming one of the most beautiful bridges in the world. The original glass paving installed on the bridge consisted of an anti-slippery upper surface that complied with all local regulations and was tested and considered suitable by all control departments of the administration. In the daily use of the bridge, the inadequate use of certain heavy elements or even acts of vandalism have led to the breaking of some glass panes of the original flooring, which unfortunately were later replaced with inadequate glass. In the current situation, our office supports the Municipality's substitution of glass panes for trachyte stone paving slabs, consistent with the bridge design and the surrounding cityscape to maintain its beauty and functionality." 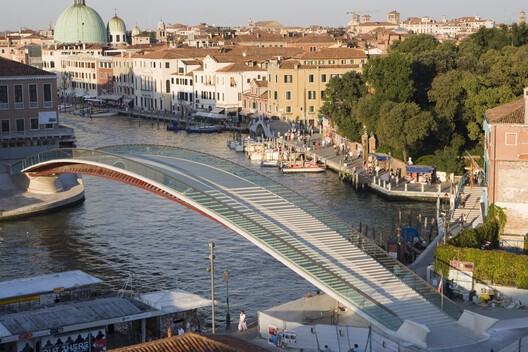