Save
From Aristocratic Displays to Eco-parks: The Current Questions and Future Design of Zoos
Share
Or
Copy

Around the world, zoos draw in hundreds of millions of visitors each year. For some cities, they’re major tourist attractions and economic hubs that generate taxpayer dollars and create long-term employment for thousands of people. But beyond these statistics, people have been criticizing the role that zoos play in our society and the way in which we design them that holds the potential a more positive and natural environment for animals.

While zoos themselves have historically been paired with questions around the ethics of their sheer existence, is there a way to rethink the way that we place them within an urban context? Currently, a successful zoo design is expected to balance the line between creating an environment that is liveable for animals while also being able to adapt to change as we continually redefine what it means to keep an animal in “captivity”. The zoo design also needs to consider how to create a safe zone for visitors to be educated up close by seeing these animals in their pseudo-habitats.

The origins of the first zoos were merely a way for the wealthy aristocrats to house their exotic animals and put them on display for passersby- not knowing much about how to care for them and what their natural habitats were like. Vienna’s Tiergatden Schönbrunn is the oldest “modern” zoo in the world. What started as a royal menagerie in the mid 18th century became an example of people’s curiosity about the natural world and how to interact with it. After the end of the French Revolution in 1799, Paris opened its own animal facilities and zoos were seen as a place for scientific experiments, where researchers could observe animals in an attempt to learn more about them. While this sense of educational discovery still remains today, scientists and much of the public alike have realized that maybe there’s a better way to understand animals without containing them in a harmful way.

Winning Concepts for Zoo of the 21st Century Competition Announced

Nearly five years ago, Buenos Aires, Argentina announced that they would shut down their zoo that had run for nearly 150 years. After facing pressure from the public and wanting to find a better way to care for their nearly 2,500 animals, the zoo decided to establish a 44-acre eco-park where visitors would be able to experience their animals in a more natural setting. Even Bjarke Ingles Group unveiled their proposal for a less confined zoo experience back in 2014. The firm designed a master plan, one that places animals within their respective ecosystems and moves visitors around through various forms of transit through three loops- one for each of three continental themes of America, Africa, and Asia. In Asia, visitors would sail from place to place, in Africa, visitors would get to ride a bike, and in America, visitors would fly. The overall goal is to create an environment that minimally disturbs the animals, creating a less stressful habitat where the public can enjoy seeing them up close.

These dramatic shifts in transforming the zoo typology are attempts to “unzoo” the zoo, and make it more about an animal in its natural habitat being placed at the forefront, and less about it being a convenience for visitors who can walk around a confined park. A zoo itself is a sort of subversive theatrical and observational event, but by making the zoo an existing ecosystem, it no longer highlights the ability for a visitor to press their nose against the glass and expect to see several gorillas, or just across the aisle and see leopards in their confined areas. Instead, these “unzoos” provide a way to more accurately depict the reality of wildlife, transforming more into a teaching tool of how animals interact, how plants and nature play a critical role, and the very real impacts that climate change has on nature away from the isolation of a zoo pen.

This exercise in rethinking how we design zoos is important to consider how we rethink all aspects of society as our goals and ideas continuously shift. The zoos that we are familiar with today might not be the zoos that we imagine for our future, which leaves room for designers to invent what’s most important for animals, and people. 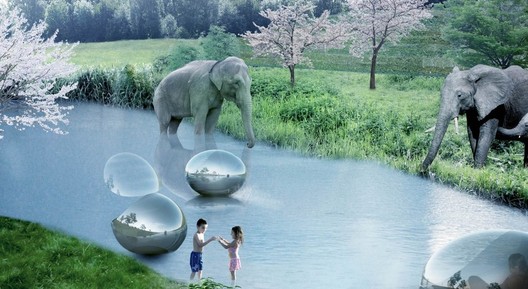