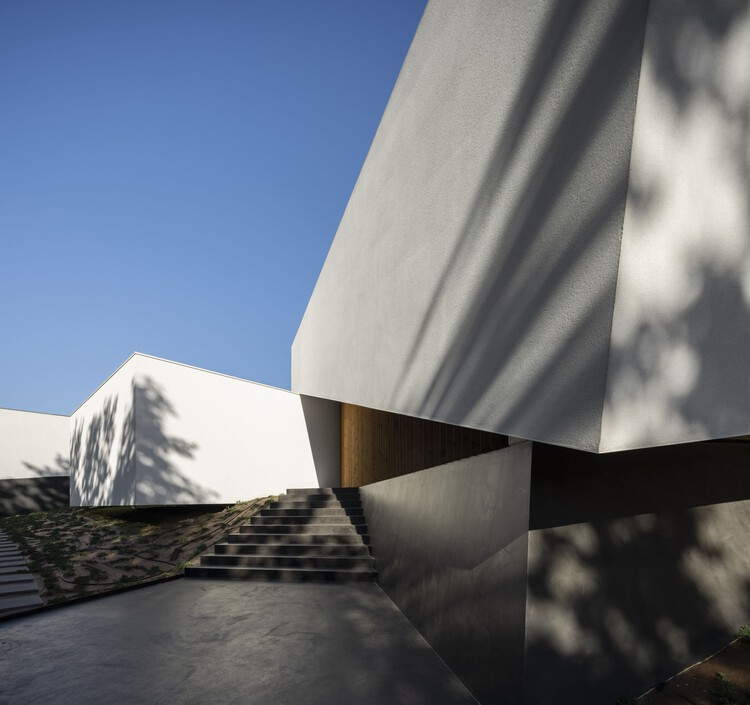 Text description provided by the architects. The challenge was launched to carry out the project for a one-story house to be built on morphologically regular terrain. The surrounding area was, at the time the project was carried out, urbanistically stabilized, characterized by an essentially endowed residential area, in the vicinity of several agglomerations consisting of single-family houses and some collective housing buildings.

The fact that the land has two fronts, for streets with different altitude levels, promoted the possibility of deploying the house at an intermediate level and thus strategically separating the pedestrian access from the car access. TILT is the concept that generates the proposal and characterizes the 3-axis rotation movement of the volume that constitutes the social area of the house. This movement made it possible to define the main entrance and, at the same time, enhance the space destined for the pool patio, giving it privacy in relation to Avenida Miguel Bombarda, characterized by a greater influx of traffic. This movement also adds a dynamic change to the ceiling height of the home, enhancing the area destined for the living room.

The programmatic definition was implemented in accordance with the cardinal points, with special attention to the solar rotation movement, so the area for the bedrooms was implemented at the east and in turn turned to the access road with less traffic, Travessa Miguel Bombarda, developed to the more intimate side of the garden. The master suite approaches the southernmost part of this volume and in turn, connects to the pool area. The kitchen was located in the center of the house, enhancing the different relationships with the various spaces that make up the program. The room is set in a central area of the land, benefiting from east/south/west sunlight and where it is possible for the user to have a broad visual relationship with the external surroundings.

In order to guarantee the privacy and at the same time maintain the quality of light inside, two patios were designed, one in the office and the other in the bathroom of the suite.