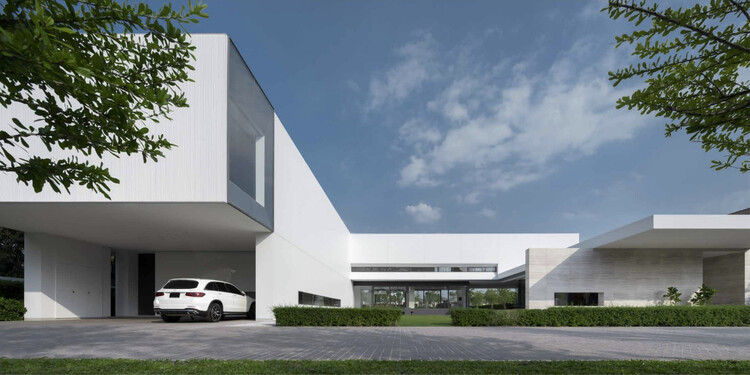 “Our family is introverted. We value and enjoy our privacy and rarely socialize. Consequently, we would not want anyone from the outside being able to look in at us. But amongst ourselves, we have a very enjoyable rapport. Therefore, we would like to be able to separate the formal public living room from the family living area while providing the ability for the occasional sneak peek”. That was the initial conversation between the house owner and A49HD 5 years ago.

Following that initial discussion, the designer focused on the owner’s requirements creating a unique concept for the project. The zoning requirements of public and private areas became one of the key design concepts. A U-shaped arrangement was found to be the best solution to achieve the architect’s hypothesis in terms of layout and composition. There are separate public and private entrances. A covered living terrace acts as a transitional space and buffer zone between the formal and family living areas. The swimming pool, situated at the rear of the grey travertine wall, also serves to distance the public and private areas. Thus, if the formal living area is utilised for a function, the family living room can be occupied without disturbance and remain private.

The name “Hidden House” is derived from the appearance of the front façade which gives little clue as to what lies beyond, perhaps even to the extent of being unwelcoming or non-existent. Solid walls are used to shield the interior spaces from neighbours and provide privacy. In contrast, the solid façade allows for the house within its boundaries to have an open layout with more fenestration as the privacy has largely been achieved by the solid external walls. One of the key visuals in this residence is the sculptural main staircase, dubbed “a stairway to heaven.” It resembles a piece of art conveying a spectacle of anti-gravity.

A sense of dynamism is created in the transitional landing space, where the lower flight of stairs, which appear to sprout from the ground, meets the flight of stairs which seem to float down from the upper floor. This striking visual is created through a feat of engineering. Light filtering in from the slim skylight and tapered ceiling above creates a play of shifting light and shadow throughout the day. The animated light breathes life into the space, like dancers moving to the rhythm of music.