Save
The Second Studio Podcast: Interview with Steven Ehrlich
Share
Or
Copy

This week David and Marina are joined by Steven Ehrlich, FAIA, RIBA and Founding Partner of Ehrlich Yanai Rhee Chaney Architects to discuss his working as an architect for the Peace Corps in Morocco, his architecture office in Los Angeles, Julius Shulman, his work, current challenges in the profession, and more. 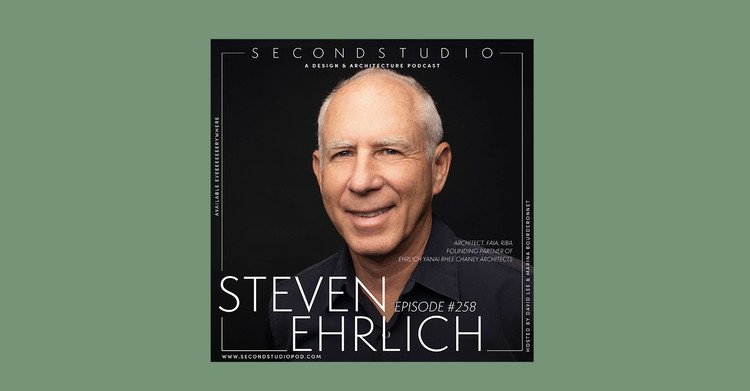 Steven’s early interests in architecture and working as an architect for the Peace Corps in Morocco. (00:00)

I had this desire to build things early on, as a kid. At the age of 12, I designed for my science fair project, a solar home. And by the way, back then in 1958, nobody was talking about solar homes. The most research I could get done was in a magazine called Popular Mechanic, nothing in architectural books or magazines! (01:23)

On working as an architect in Morocco

The architecture is there. It’s just there. It’s not about style. It’s not about ‘look at this or ‘am I different?’ It’s the most gracious and simplest response to the climate, to the environment, and to the materials at hand. So it’s all very fundamental. You get the most from the least in a way and that left a very lasting impression on me. (08:53)

Steven moving to Los Angeles and starting own practice and Julius Shulman photographing one of Steven’s first projects. (12:55)

[At the beginning,] I kind of was really an expert at closet remodel and bathroom remodels. It was tedious, but I got through it. Then I had a real breakthrough where my clients wanted to build a painting and photography studio right adjacent to a Richard Neutra House that they owned in the Hollywood hills. I designed a very pure, simple, cubic composition of stucco, steel, and glass… really exploring how light comes in. When it was completed I contacted Julius Shulman to see if he was interested in photographing it. He got very excited after I showed it to him because he was very tired and anti-the postmodernist movement. […] He took these beautiful photos and he said, “I’m going to help launch your career” And you know what? He did. Within six months it was on the cover of the New York Times home section of the newspaper. (21:05)

The challenges of branching out to do different kinds of projects and office growth. (25:25)

It’s very hard for a fledgling architect to get a public project if you haven’t done one before. I have to say it’s much harder today than it was back 40 years ago because today in the submittals it will say "Show us in the last five years, the last three libraries you’ve done.” It’s a Catch 22. It really is.(26:00)

When we did the renovation or readapting of [the Schindler home], we answered every question in a way that we didn’t feel we had to be a slave to the architecture. We said, “What would Schindler do today?” And not be married to what he did literally in 1940. So we opened up the kitchen to the living space. And by the way, it’s a 1,000 SF house. It’s very modest. It’s now effectively a brand new house… It’s Schindler’s vision, but refreshed. (39:55)

I wouldn’t use the word to describe any of our work as pretty. No No. That’s not allowed! We can’t use that word. […] We don’t have a singular way of doing it. We’re not creating a brand. We like to approach each project quite empirically, whether it’s a house, office complex, or academic building. We want to resolve it from an empirical point of view and understand the urban context, the environmental constraints… We like to be sensitive environmentally and culturally. […] So, we don’t have style! Ha! (46:12)

The type of project Steven Ehrlich would like to design. Steven’s own home, 700 Palms. Design process. (59:00)

The office structure of EYRC. The challenges of producing architecture today. (01:12:56)